Making is the new thinking (just thought I'd mention that). 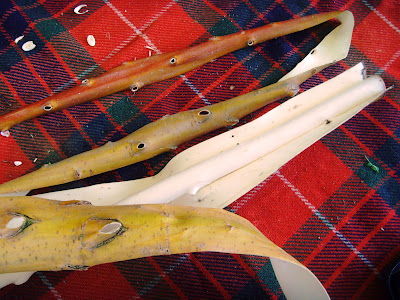 Another great workshop with Hertfordshire Basketry last Saturday, a follow-up to last summer's bark-stripping fest with Maggie Smith.  It was June, the sap was high and this was one of the most enjoyable workshops ever and an epiphany for me as I'd never stripped bark before.  From choosing a log and making the first tentative incision to the deeper cut with a keen blade, from the careful prising with an improvised bark spud to the probing and gentle massaging with sap-soaked fingers, from the gradual emergence of the milk-white heartwood to the final release of the bark with a satisfying slurp I was hooked on the whole sensuous process and will never look at logs the same way again! 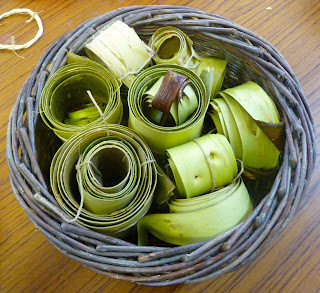 
Getting hands-on with raw materials and processes like this is what I find so compelling about basketry.  It also vitally informs my understanding and appreciation of any finished works. 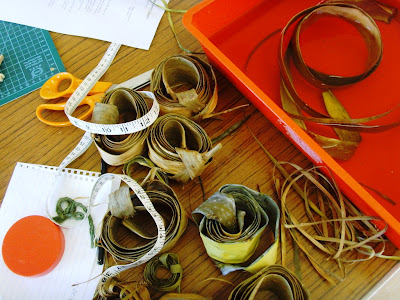 This time we brought along our dried bark and Maggie showed some techniques and shared some of her top tips for making bark pouches and pockets - small forms that were achievable in a day.  In the morning, after soaking the bark to make it pliable again, she talked us through the health and safety procedures for safe handling of the razor sharp bark cutting tools.  Finer bark is best for plaiting and after only a few seconds of pulling it through the cutting blades we  ended up with piles of long, narrow, even-width ribbons which looked exactly like fresh tagliatelle pasta.  (I've tried plaiting with fresh pasta - it's much too brittle - not a patch on bark.)  Maggie gave us more tips for handling the material she'd picked up from two world-renowned bark workers, Dorothy Gill Barnes and Joan Corrigan, and by lunchtime we were all on the way to finishing our pockets.  I decided to leave mine unfinished - I've always loved the aesthetics of loose ends - like a promissory note for further inspiration. 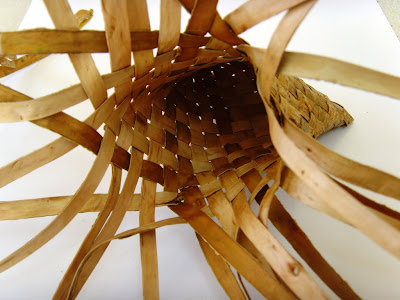 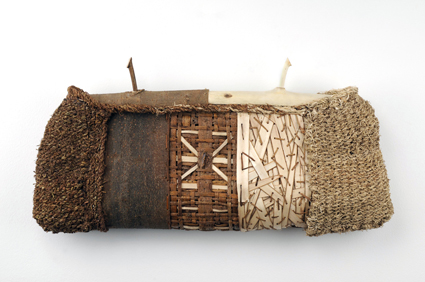 Maggie's been passionate about willow and bark since completing the Advanced City and Guilds Diploma in Basketry at the City Lit in 2002.  I finished my Part One Diploma a year later.  She now grows her own willow on her allotment in Northamptonshire and collects bark from other coppiced trees, such as eucalyptus,  from her own and neighbours' gardens.   Nothing is ever wasted - she uses every scrap of root, twig, bark, bast, leaf and shaving.  The by-products of one process, such as skeining, can be used for another such as cordage and Maggie's even perfected a way of creating willow paper from the very finest floor sweepings.

After lunch we moved on to making pouches with some of our thicker, rougher-textured bark.  Assembly techniques such as stitching, pegging, lashing and wrapping are perfect for this and you can be as quick and dirty or painstakingly fastidious as you please - there's a technique for every temperament or time-scale.  I used stitching and found  the finer leftovers from the mornings plaiting made perfect stitching material.  Random looping with more fine strips filled the sides of my pouch and in no time at all - Ta-dah! my bark pouch was done.  Ta-dah! as Maggie explained, is an exclamation much used by Joan Corrigan and perfectly describes the moment of joyous revelation when all the materials,  processes and techniques, including the processes of preparation and design, come together and one has made something as if by magic. 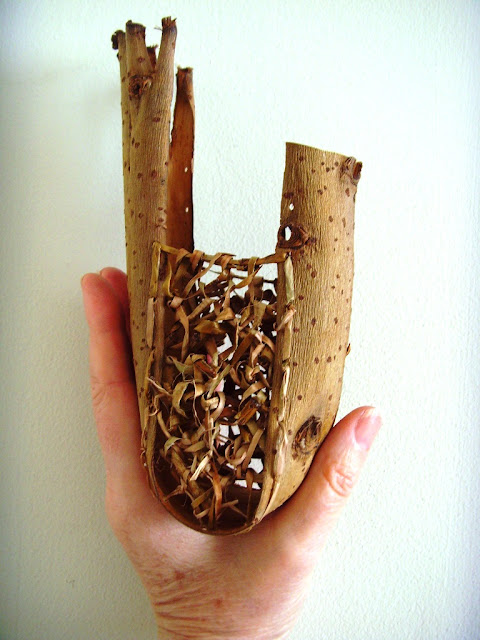 Ta-dah!
Well, almost by magic.  It's the special magic of making that comes from not having to think too hard about the processes and techniques because they've become almost second nature - invisible - like the air the maker breathes.  The hand is able to grasp what the mind can let slip.  Handmade objects have a magical quality because they've been touched.  Gifted and inspiring makers like Maggie are able to share some of this magic, partly by making works that, literally, bewitch the senses, partly by revealing, communicating and engaging others in the enchantment of material process and techniques.

Willow explorations by Maggie Smith can be seen at the New Ashgate Gallery in Farnham where she is taking part in a Basketry Focus Exhibition with Mary Crabb and Stella Harding until 28th January.  See http://www.newashgate.org.uk/ for details.  She also has work in a Craftspace touring exhibition 'Made in the Middle' which opens on February 11th at MAC Birmingham. See http://www.madeinthemiddle.org/
Posted by stella harding at 05:49