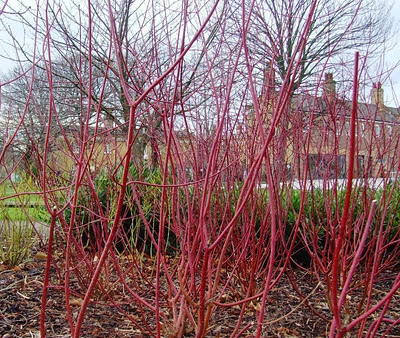 One of my favourite materials - red dogwood (Cornus alba Sibirica) - it warms the heart on a wintry day.

It's been great to spend time in the studio this mild and sunny winter.  The heater's been serviced and it's quite toasty at times.  Very different from last year's bitterly cold snap when, apart from a few chilly forays into the local park taking photos for the materials chapter, I spent most of my time at home on the lap-top researching and writing the text for 'Practical Basketry Techniques'.

Now, with publication  less than three weeks away, I've been busy sorting out work for a showcase at the City Lit  - the centre for adult learning where I did most of my basketry training.  The Visual Arts and Publicity Departments there have been wonderfully supportive and, in addition to the showcase, have invited me to do a book signing session on the actual day of publication, Thursday 16th February. They'll also be running a fun competition to win a copy of the book - kindly donated by the publishers A&C Black.  More on this later.  If you're reading this after 6th Feb. you might be searching for the winning answer.  Read on ...

It's all got me thinking about my time at the City Lit and what a life-changing experience it was for me.  I started my two year City and Guilds in Creative Basketry in September 2001 - just days before the catastrophic events of 9/11.  Who can ever forget what they were doing on that day.

The Part One City and Guilds was a highly structured course which, in addition to introducing all the major traditional basketry techniques; coiling, twining, stake-and-strand, plaiting and looping, also focused in depth on three commonly used  materials - willow, cane (rattan) and rush.  We were encouraged, however, to use as wide a range of materials as possible and to experiment with and combine them freely.  We were fortunate in having gifted and inspiring tutors, including Mary Butcher, Joanne Gilmour, Shuna Rendel and Polly Pollock, who also had their own contemporary basketry practices. 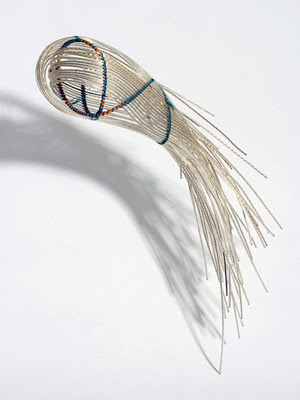 An equally important aspect of the course was the research for Prepared Working Designs.  Several of my fellow students questioned the relevance of the design element, especially as we started with a hefty six week design block.  While others were champing at the bit, desperate to get their hands on a basket, I was loving it.  Looking back, for me, this was the perfect way to begin the course as it re-connected me with drawing and mark-making in the widest sense.  There was no insistence on an end product - personal research, experimentation and exploration were the key concepts.  On the first day I sat across a table from Daniel who was doing post-gratuate studies in Fine Art at the Prince's School - moonlighting in basketry!  We giggled like two messy kids on the naughty table as we revelled in all the cutting out, sticking and colouring in.

When I did finally get to make my first basket  though (an open weave, bias-plaited container) I almost cried for joy. Suddenly every other thing I'd ever done, including studying sculpture at art college after leaving school, made sense and it felt as if at last I fitted my skin. 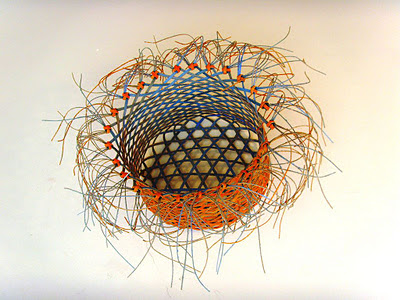 Painted and Plaited spun paper (with hex-weave, bias plait and windmill plait) - not quite my first basket but it uses similar techniques and the 'loose ends' came to be a feature of many subsequent pieces 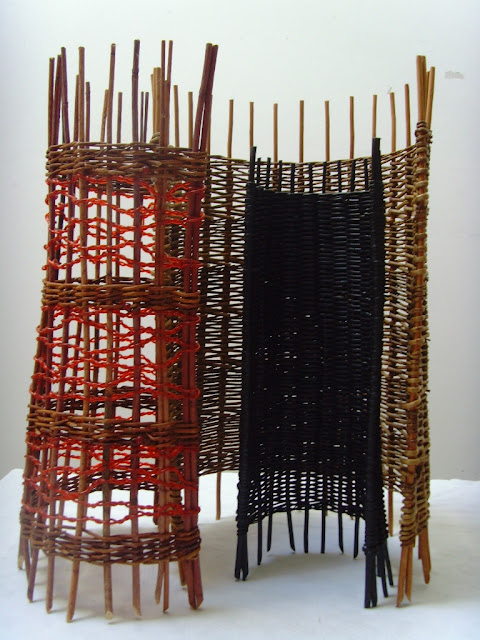 A re-configurable willow piece  from my Part One final project using buff and brown willow, plastic washing line and spray paint.  Not so much loose ends as an absence of traditional bases and borders. 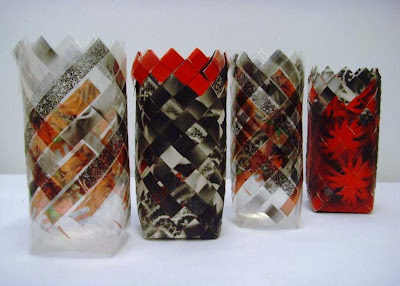 
When that course finished in 2003 I had to wait another two years until 2005 before I could begin the 'Level 3 City and Guilds Diploma in Design and Craft (Constructed Textiles) in the context of Basket Making' - a bit of a mouthful - we just called it Part Two!  In the meantime I'd been developing and exhibiting my own contemporary basketry.  The diploma course introduced more advanced techniques such as twill plaiting, mad-weave (so-called because it's so complex it drives you crazy!), complex linking, square willow work and ever more tortuous borders, fixtures and fittings.  There was more research and writing too in the form of a Research for Design Project and an Illustrated Study on an aspect of traditional basketry.  I chose as my topic the painted, twined basketry of the Yanomami women of the Amazon rain forest.

I'd begun to paint on my materials on Part One - spray paint being my favourite medium for its immediacy and quick drying properties.  There was indignation from some fellow students when I spray painted buff willow for one of my final project pieces (see above).  It was as if I'd desecrated hallowed ground.  Why would one want to hide the natural beauty of the  material?  A question I continually ask of myself with differing answers depending on what I'm making. 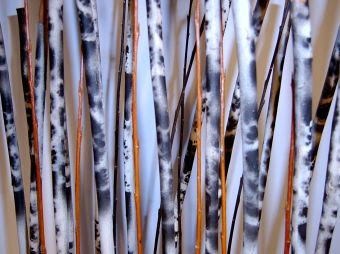 Details of stencilled willow - the bright orange is the natural colour of a variety of Salix alba grown organically by Lois Walpole.

I continued to develop and experiment with surface mark-making all the way through the course.  Most of the drawing or painting included text or notation of one kind or another - mostly barely decipherable writing or lettering but sometimes numerals and abstract symbols. 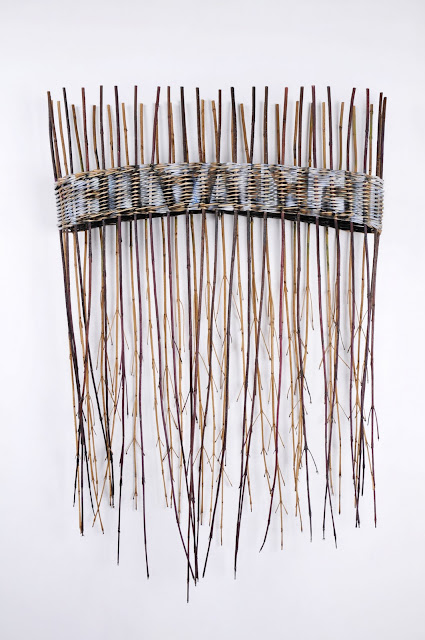 I studied Communication Studies in the 1980s and went on to do post graduate research in Critical Linguistics and Discourse Analysis before finally lecturing in a Social Sciences Department.  Not long before I left academia I'd ended up on a research project studying the culture and discourse of  mathematicians.  Part of my 'going native' on the ethnographic side of the project meant having to attend a whole course of lectures on abstract algebra and propositional logic in a department of Maths and Computing Sciences.  For a maths phobic like me it was like being stranded deep in an impenetrable jungle of mind-boggling incomprehensibility without access to clean water or  insect repellent.  All a far cry from basketry it might seem.  Help, I'm an artist really - get me out of here! 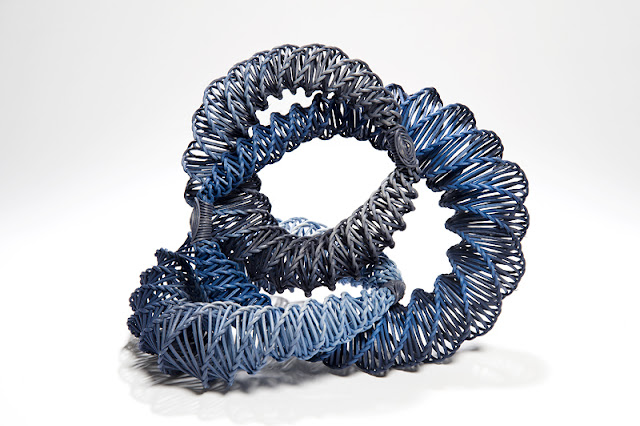 But, actually, as I later found out, not so very far removed from basketry at all, as many of the plaiting techniques I encountered and took to like a duck to water have an underlying mathematical basis.  In fact several ethno-mathematicians are now studying basketry for the light it can shed on our most basic human understanding of number and geometry.  For me basketry is like a three-dimensional, geometric play-school. 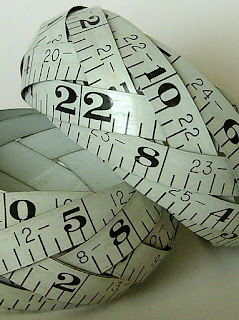 Plaited vintage printed steel tape measures - I made my first one in 2003 and wore it to the private view of the Part One Final Show. 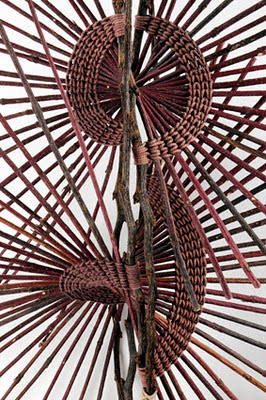 One of the forms I often return to is something I discovered by accident - just playing around with, combining and manipulating materials and techniques in an intuitive way - a hyperbolic paraboloid structure. The sub-editor of Crafts magazine worked with my cohort on the Craft Council's Hothouse Programme for emerging makers. Unfortunately for me his passion for non-Euclidean geometry was matched only by his disdain for the use of pretentious, out-dated buzzwords - such as hybridisation. 'If you must use buzzwords at least make sure they're current!'  He suggested I don't try to explain the maths of this particular structure as I clearly don't know what I'm talking about.  Fair cop! I don't.  However, my hands seem able to grasp it and my work gets no end of interest from engineers, architects and mathematicians.  The forms and techniques speak to them in a language they understand and gets them talking to me about the work rather than the other way round - which is a huge bonus.  I made an 18 feet high version for the Gallery at Pitzhanger Manor recently.  I called it NOVA (new star) partly because my name means 'star' in Latin.  We did a workshop for a group of 5-11 year olds and one seven year old budding astro-physicist, fluent in Latin, explained more about nuclear fusion on the surface of a white dwarf than anything you'd discover from Wikipedia.  So, I'll be keeping quiet about this one too.

Communicating ideas about ones own work can sometimes be more difficult than giving a lecture on Foucault's concept of power in five bullet points.  I like to think though, that having done the latter for a few years with some degree of success has proved a good grounding for writing clear instructions on how to do a three rod wale.  No experience wasted.  Time will tell .........
Posted by stella harding at 13:03