PARALLEL LINES - Maggs Beneath the Covers 4 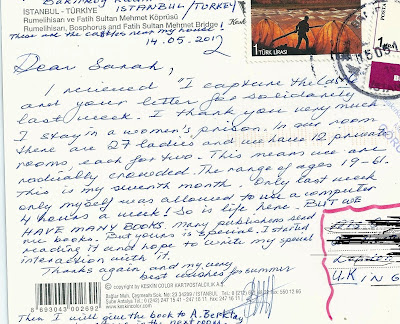 Fantastic news! Today's Friday 13th of July and I've just received a Tweet from English-pen letting me know that Professor Busra Ersanli has reportedly been released from custody.   She, along with over 180 other writers, publishers, journalists, students and human rights activists, was arrested in Turkey last October and has been held in a women's prison, awaiting trial, ever since.

I came across her name after doing an internet search for women writers in prison soon after hearing, on Friday 13th of April, that my proposal for 'Maggs Beneath the Covers' had been accepted.  The more I read of her case on the websites of Pen International and English-pen the more I was struck by the uncanny parallels with Francesco Ghesi the owner of the book that had inspired my proposal.

Like Francesco Ghesi, Busra Ersanli is a published writer and a university professor - of political science.  Like him she'd been held in prison awaiting trial and like him had spent her time writing her own defence against the spurious charges levelled against her.

There was another reason though, why I finally chose to focus on her story to represent contemporary imprisoned writers.  After contacting English-pen to let them know of my project and then again to ask for advice on contacting writers in prison, Cat Lucas of their Writers at Risk programme emailed me a digital image of a postcard that Busra had sent to Sarah, an English-pen member.  In celebration of World Book Night, Sarah had responded to English-pen's call to send a book to an imprisoned writer.  Sending a book is an uncontroversial way of making contact and letting a prisoner know that they are not forgotten.  The book Sarah chose was 'I Capture the Castle' by Dodie Smith - one of my own all time favourite reads. 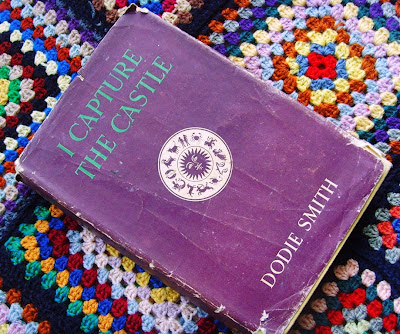 My own much loved copy of 'I Capture the Castle'.  It's been a comfort blanket in difficult times and never fails to make me smile.

It's a captivating and gently humorous portrait of a young girl trying to find her voice as a writer above the clamour and chaos of her eccentric, impoverished, artistic family.  The opening lines find her sitting in the kitchen sink to write her journal.

"I write this sitting in the kitchen sink, that is, my feet are in it; the rest of me is on the draining board which I have padded with our dog's blanket and the tea cosy. I can't say that I am really comfortable, and there is a depressing smell of carbolic soap, but this is the only part of the kitchen where there is any daylight left.  And I have found that sitting in a place where you have never sat before can be very inspiring ..."   How very true! A charming reminder that we all need to move outside our comfort zone from time to time.

This common tie of having read and enjoyed the same book I felt gave me an introduction to writing to Professor Ersanli - a shared experience, however small, helped bridge our different worlds.  Though, actually, not so very different.  In some of the reports of her arrest and trial she was described as a "Professor of Sociology", and I too had taught university courses in sociology some years previously.

I found it ironic, but strangely levelling that now, in these days of instant digital communication, we were forced to rely on the exchange of handwritten letters and postcards which might perhaps take weeks to arrive - if at all.  Though books and messages of solidarity were getting through in this instance, Cat Lucas warned me that sometimes prisoners of conscience have been presented with sacks of mail only on their release - denied the solace during captivity of knowing there were those who cared.  In some cases, imprisoned writers have gone to extra-ordinary lengths to communicate with family or friends: writing in infinitesimally small script on minute scraps of paper or fabric, begging or bribing guards - who are often more sympathetic than one might think - to smuggle messages, or seeking help from other prisoners to get the word out.

Francesco Ghesi's story, written over four hundred years ago between the lines of his little book, on every page, sometimes only two or three lines per page, wherever he could find the space to communicate his innocence and pleas for justice, still, unfortunately, finds parallels today.

I've always felt that basketry as with any mode of creativity is about making connections between different lines of thought and material practices across social, historical, political, cultural and temporal spaces. Yet it still remained for me to find a way of weaving all these parallel storylines together ..........

Posted by stella harding at 14:13 No comments:

HARD LINES - Maggs Beneath the Covers 3 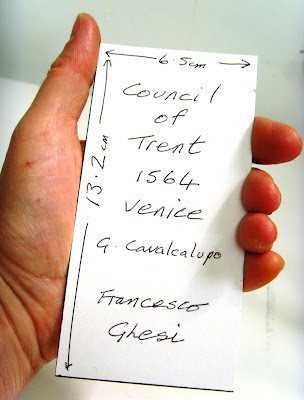 "Hard lines chuck", my partner the ceramist consoled when I told him the book I'd chosen as my inspiration for the project 'Maggs Beneath the Covers' had been sold to a university library in the United States.  After the initial stab of disappointment at not being able to see or hold the book for myself  I quickly realised there was a  curious symmetry to what I now regarded as my 'lost object' of desire - in Lacanian terms that which drives the urge to create.

The material realisation of a piece of work comes in many forms and I've never been especially interested in literal depiction, recreation or illustration.  Now that the actual book was gone I could fully turn my attention to its owner - the mysterious man in the Roman prison - who I would also never see except in my mind's eye and the signficance of his own interventions into the text. 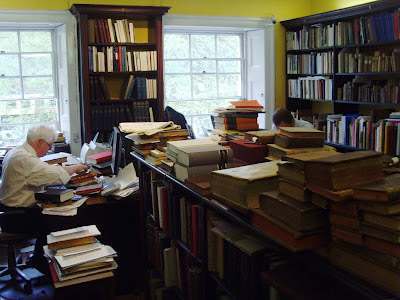 Paul Quarrie at work in the Continental and Illuminations Department

Paul Quarrie, who had researched the book prior to its sale, soon provided me with fascinating background information, including its title and dimensions.   As one of the many editions of the canons of the Council of Trent, written in Latin and printed in Venice in 1564 by one G. Cavalcalupo, the small book was neither rare nor remarkable.  Ironically, as Paul had explained on the site visit, books such as this, written in Latin, are now quite hard to sell as so few people read the language these days.  With its plain vellum cover it wasn't even desirable as a decorative addition to a gentleman's study or country house library, unlike the many lavishly tooled and gilded Continental books of a similar period on display in the department. 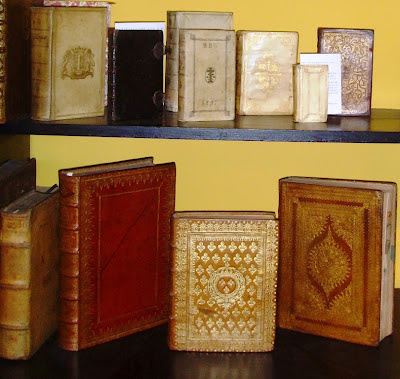 Ordinarily it wouldn't have had much going for it and might have languished in Maggs back catalogues for decades.  Certainly, I'd blinked and almost missed it. What made it special was its extra-ordinary provenance.  Its owner Francesco Ghesi had been a professor of philosophy and theology who'd taught first in Naples and then in Rome.  He was himself a published writer of several manuscripts and printed books.  Somehow though - possibly through connections to Giovanni Morone, one of the more heterodox thinkers of the time - he'd fallen foul of Pius V who was elected Pope in 1566. 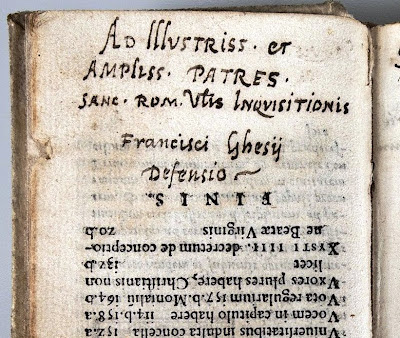 Upon opening the book it had been revealed that Ghesi had turned it upside down and back to front and, throughout its 184 pages, between the lines of printed text, he had handwritten his defence to the Roman Inquisition whilst imprisoned by the Pope under suspicion of heresy.  It was probably precisely the fact that this was such an unremarkable volume of religious doctrine, so small as to fit easily within a man's grasp, that he'd been able to carry it with him to prison.  And, anyway, how could the Inquisition object to a prisoner reading and reflecting upon the very canons of faith against which he'd allegedly committed heresy.  He finished writing his defence, with its poignant plea for justice, in December 1570 but  was only freed in 1574, following the death of Pius V, after spending eight years in prison.  Francesco Ghesi died in 1578 "unable to enjoy other than in paradise the prize of his innocence". 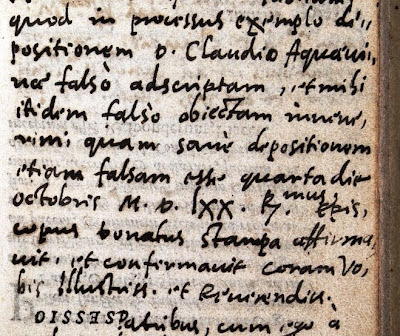 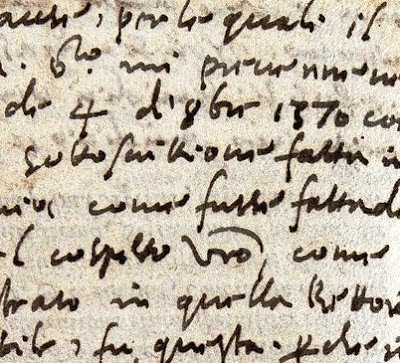 I now knew which material I wanted to use to make the piece.  But first I had another difficult choice to make;  one contemporary writer, a prisoner of conscience, to represent the hundreds, if not thousands, imprisoned worldwide today .........

Posted by stella harding at 07:23 No comments: