FOR PRISONERS OF CONSCIENCE 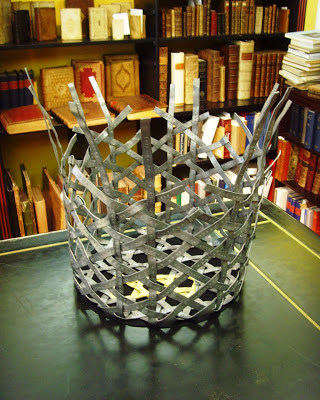 May justice prevail today as writers, publishers, journalists and students go on trial again in Turkey.

Professor Busra Ersanli, translator and women's rights campaigner Ayse Berktay, publisher and Nobel peace prize nominee Rajip Zarakolu and student Deniz Zarakolu are amongst many others who face long prison sentences if convicted for speaking out against injustice.  Pen International, English Pen www.englishpen.org  have been campaigning on their behalf for nearly two years during which time many have been held in detention.

My piece for 'Maggs Between the Covers' was made to highlight the plight of prisoners of conscience throughout the world and the humanitarian work of organisations such as English Pen. To give support to writers at risk you can sign up to their rapid action network by visiting their website www.englishpen.org
Posted by stella harding at 01:29 No comments: When I heard last year that this exhibition was opening at the Pump House Gallery in London I felt a twinge of regret that I wasn't part of what was one of my 'wish-list' exhibitions.  So I felt very privileged to have been asked to participate as a case study as it travels to various new venues around Britain.  I've been banging on about the mathematics underlying basketry techniques for years not to mention my own past experiences with the subject. 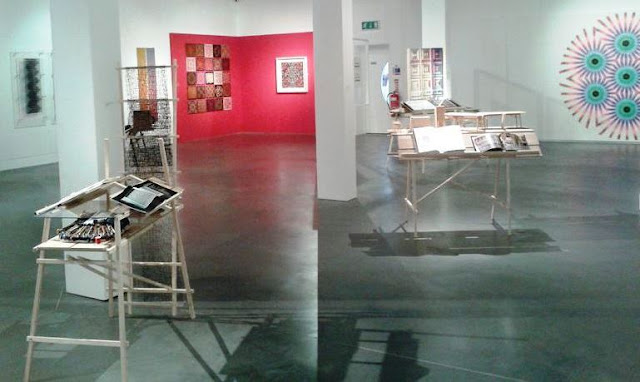 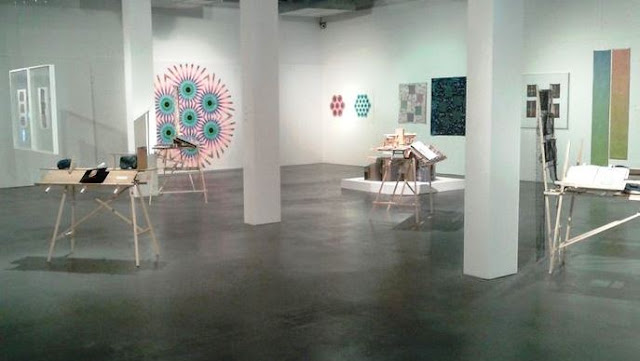 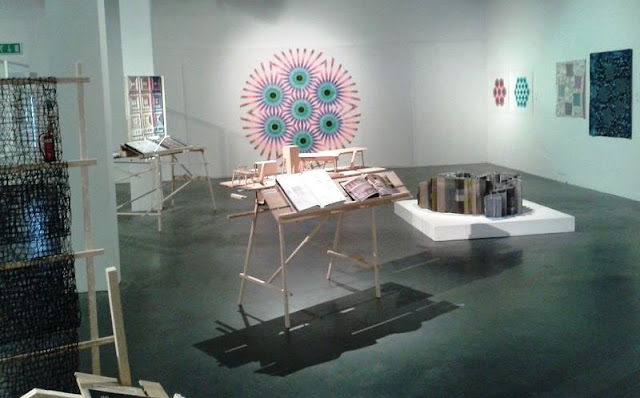 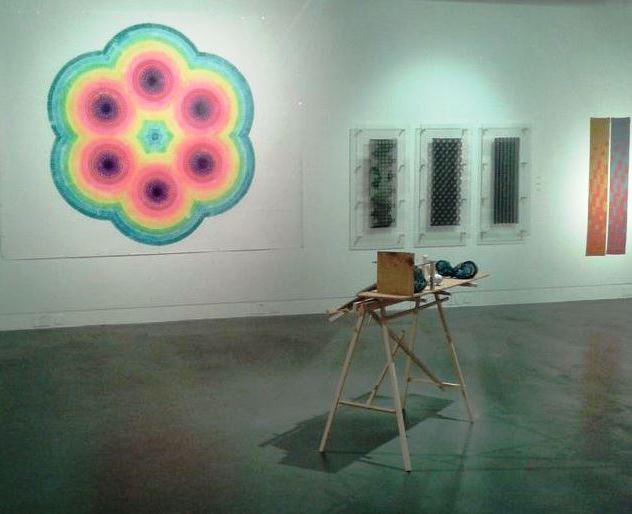 Views of the exhibition at the National Centre for Craft and Design, Sleaford.  Showing work (on the walls) by Lesley Halliwell, Janette Matthews, Michael Brennand-Wood, Janice Gunner and Ann Sutton and (on the floor plinth ) textiles by Lucy McMullen.  Four of the five case studies can be seen  displayed on specially commissioned furniture by David Gates.  Photos: Liz Cooper

The brain-child of curator Liz Cooper, herself a former school maths champ, this exhibition brings together artists and makers whose work (mostly in textiles) "explores how mathematical concepts underpin craft techniques and artistic development".  The title is a quote from British mathematician G. H. Hardy - one of the first to propose mathematics as a language for describing patterns:

"...the mathematicians patterns, like the artist's or the poet's must be beautiful; the ideas, like the colours or the words must fit together in a harmonious way.  Beauty is the first test: there is no permanent place in the world for ugly mathematics" (Hardy, London: 1941).

'Beauty' may have lost its currency as a standard for judging works of art since Hardy's day, being now considered too subjective or socially constructed a concept.  And there are many 'ugly' patterns of human psycho-social, political and economic behaviour that claim the attention of contemporary artists.  But as Liz Cooper herself points out in the Pump House Gallery exhibition booklet, the word sets up a challenge and a subject for debate - especially when applied to craft practices.

"In craft it is debateable whether one wants beauty as an end result - especially if one eschews the bucolic vision of William Morris and an idealised ruralisation of craft practice that conveniently ignores the location of most art schools and colleges, and the majority of the population, in cities and towns." (Cooper, London 2012) 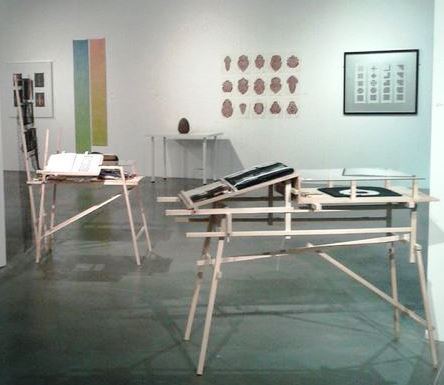 Contemporary bobbin-lace making by Gail Baxter and Carol Quarani - two of the five case studies - with sculpture and drawings by Peter Randall-Page (centre) and Ann Sutton in the background. Photo: Liz Cooper

The inclusion of the five craft 'case studies', including lace-makers Gail Baxter and Carol Quarani, furniture maker David Gates, basketry by Stella Harding and woven textiles by Margot Selby, not only adds focus on process and materiality but also challenges perceptions of contemporary craft practice. 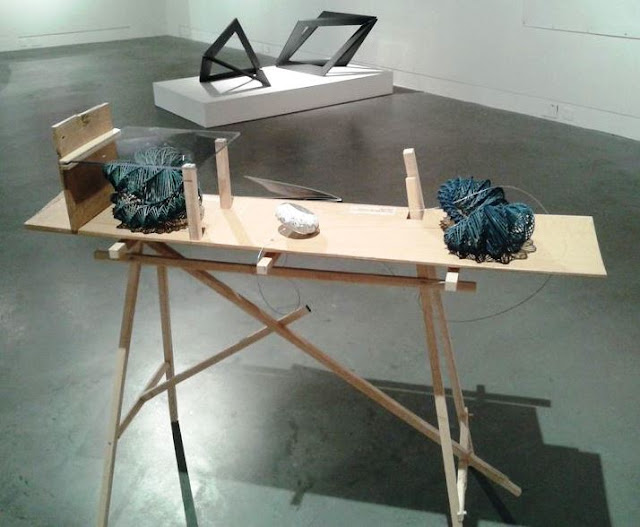 My own case study, showing three-dimensional geometric forms in a plaiting technique more often used to make straw 'corn dollies' and a wearable structure plaited from a redundant steel tape measure - disrupts preconceptions about the materials, techniques, forms and functions associated with basketry. 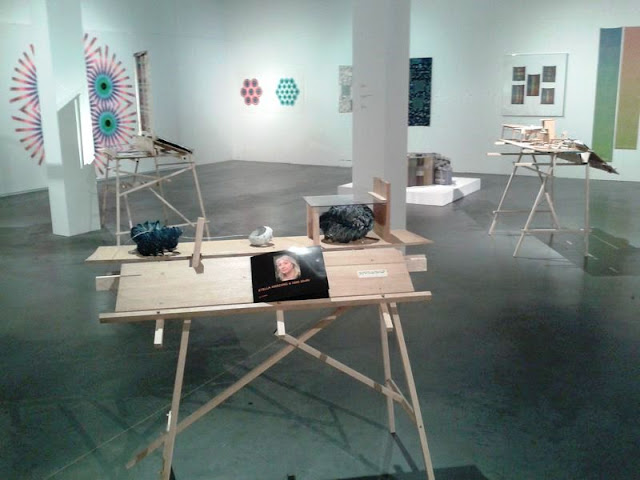 A book, with text by Liz Cooper, giving insights into each case study maker's studio practice, materials, inspirations and artistic development is displayed alongside the work.  In some cases the makers have also provided sketch-books, tools, models or work-in-progress. 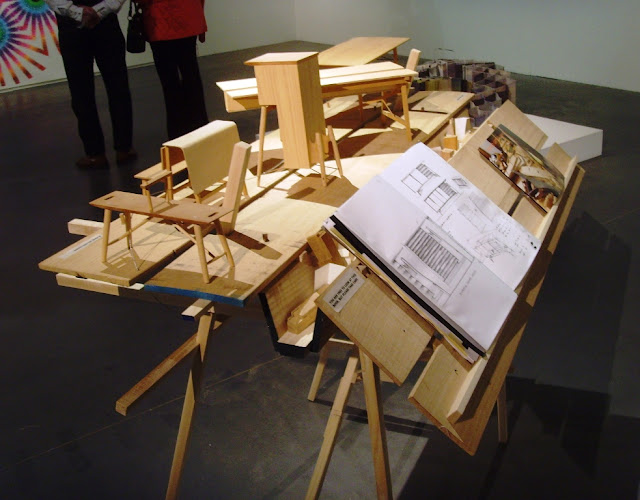 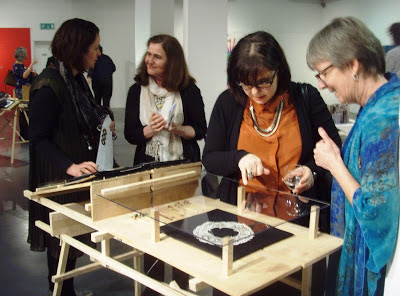 Carol Quarani's case study illustrates how she uses lace as a medium for conceptual work.  Her doctoral research explores how lace curtains can be used to re-read the relationship between the domestic, the uncanny and the Gothic 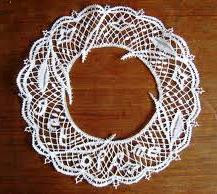 Contemporary bobbin lace by Carol Quarani
Pattern  recognition may be a basic human attribute and one of the ways in which we make sense of and come to understand the world.  Order, symmetry, balance, harmony and repetition can be safe and comforting. Often though we only recognise the significance of a pattern when it is disrupted in some way - by small irregularities, asymmetries, discord, accidental marks leading to unintended consequences.  This for me, is the beauty of  this exhibition.  If we look closely it reminds us that chaos is part of the equation - that the devil is in the detail and that beauty is only ever skin deep.

Oh, and I loved the way the shadows of the case studies on the gallery floor grounded the structures, animated the space and created a dramatic film noir effect. 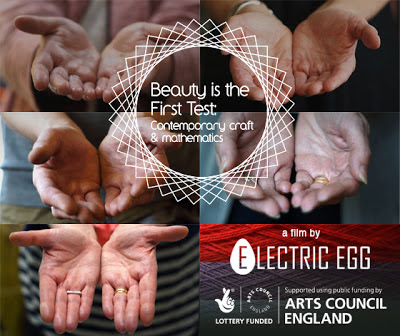 Which allows me to segue shamelessly into a plug for a forthcoming experimental film of the case-studies, commissioned by Liz Cooper from film makers Electric Egg and funded by Arts Council England.  The film will be shown alongside the exhibition from the end of May.

But I'm going to leave the last word to G.H. Hardy - ever the one for a pithy quote:

"It is a melancholy experience for a mathematician to find himself (sic) writing about mathematics.  The function of a mathematician is to do something (...) and not to talk about what he or other mathematicians have done. (...) There is no scorn more profound, or on the whole more justifiable, than that of the men who make for the men who explain." (London: 1941)

Better get making then!!
Posted by stella harding at 02:15 No comments: