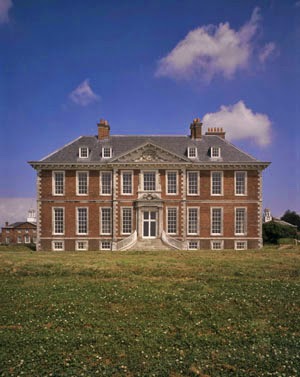 Unravelling Uppark, the latest set of 10 contemporary commissions for the National Trust curated by Unravelled Arts and supported by Arts Council England, opens at Uppark in West Sussex from 4th May to 2nd November 2014.

Unravelled Arts www.unravelled.org.uk  commissions site responsive works and interventions from makers operating at the interface of craft and fine art and the pieces are installed in historic settings in order to draw out the multiple stories, characters and artefacts associated with the site.

I've worked on a collaborative commission for Uppark with my partner ceramist Robert Cooper www.robertcooper.net Titled 'Dish of the Day: Chicken in a Basket' our piece was inspired by three characters from Uppark's history; the writer H. G. Wells, best known for his science fiction novels, whose mother Sarah was housekeeper at Uppark in Victorian times, Sir Harry Fetherstonhaugh, owner of Uppark in its  Georgian heyday and Amy Lyon (later to become Emma, Lady Hamilton the lover of Lord Nelson) who spent a year there from the summer of 1780. 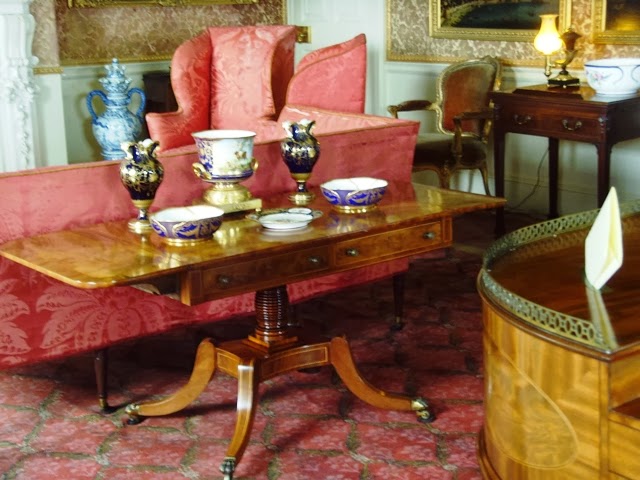 The red drawing room at Uppark
We first visited Uppark on a May afternoon last year.  The primroses were out in the spring sunshine on the banks by the car park but it was chilly inside the house and we had to move briskly through the rooms to keep warm.  If I'm honest I was also left somewhat cold by the fine array of furnishings, paintings, plasterwork and object d'art on display in the drawing rooms, parlours and bedrooms - testament to the wealth, patronage and taste of successive owners.  Uppark also bears witness to the dedication of Lady Meade-Fetherstonhaugh, an early pioneer of textile conservation and to the skills of conservators and craftspeople who helped restore much of the collection after a devastating fire in 1989. 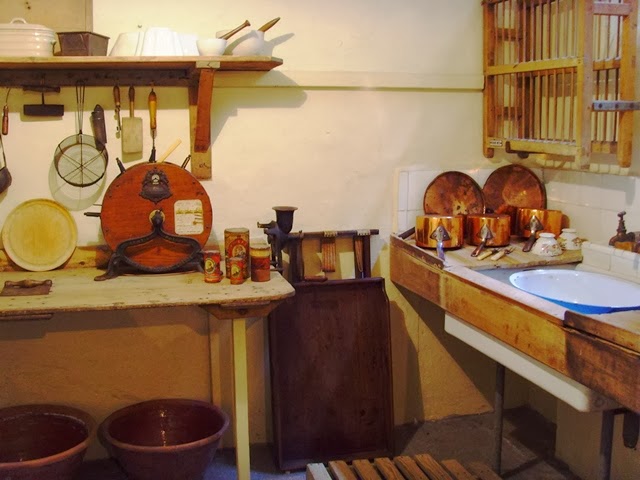 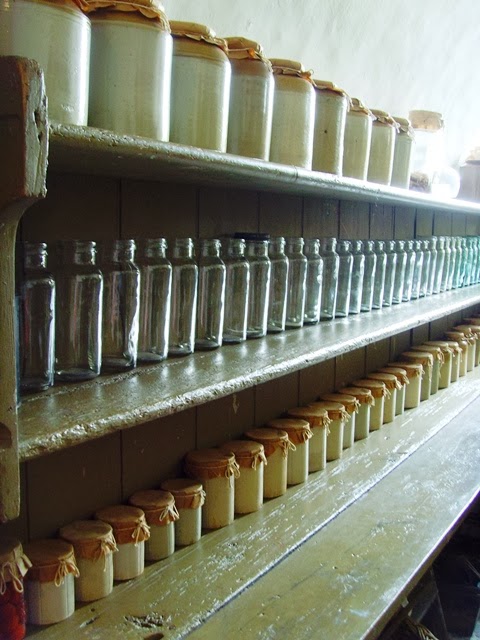 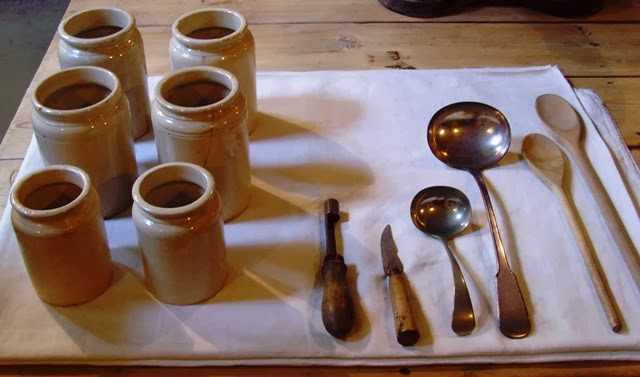 Looking back through the images I took then I was much more engaged by the downstairs world of the servants - all the bustle and repetitive drudgery of domestic labour now frozen in time and orderly array. 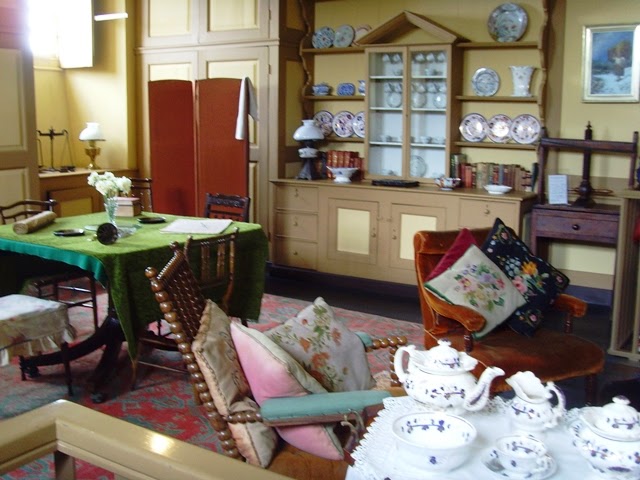 The housekeeper's room at Uppark 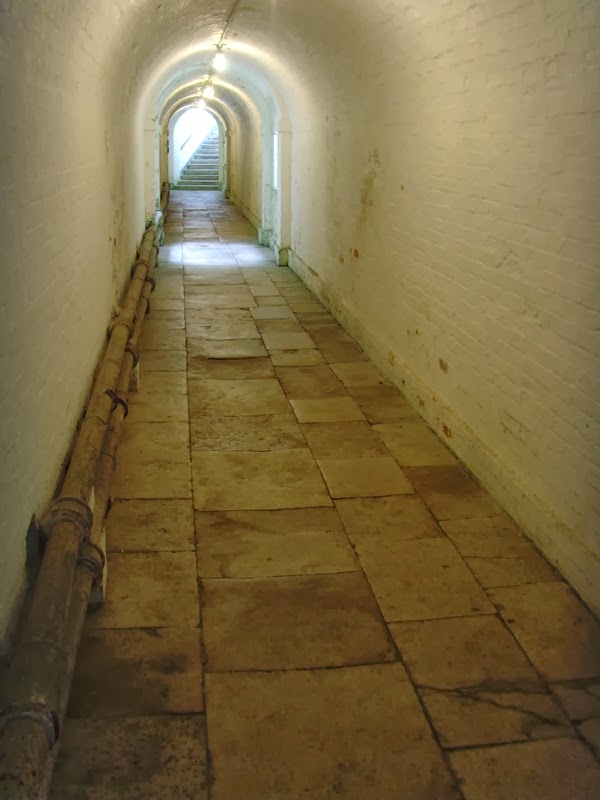 This was the below stairs world that H.G. Wells would have inhabited as a boy and the underground passages linking the kitchens with the upstairs servery and dining room are thought to have inspired the subterranean world of the Morlocks in his novel 'The Time Machine'.  It's one of my favourite science fiction stories - a first for having introduced a mechanism for time travel.  I think the novel captures some of the ambivalence towards both the upper and lower classes that Wells might have felt as the socialist son of Uppark's housekeeper and the rigid social stratification he might have observed there. Wells' vision of a future dystopian arcadia in which the human race has evolved into two distinct species descended from the upper and lower classes, one of which feeds on the other, can also be read as social critique in the grand tradition of Jonathan Swift.

Swift's 1729 pamphlet 'A Modest Proposal' is a biting (no pun intended) satire of 18th century mercantilism - the prevailing economic system in which the rich merchant classes prospered at the expense of the poor whose wages were kept deliberately low to maximise profits and increase incentives to work.  Labour was a commodity and no child was deemed too young to work.  In many cases wages were non-existent, slavery for example, and the fact that there was no legal requirement to pay girls under 16 so they were often used as cheap domestic labour.  Swift proposes a macabre solution to the dual problem of over-population and famine in Ireland - selling the children of the poor as luxury food for the rich.  It caused outrage at the time because many simply didn't perceive the irony and thought he was being serious.  The double irony is that he sort of was!  The poor were dying in their millions of starvation whilst the rich lived life on the hog in an orgy of conspicuous consumption and the pursuit of pleasure - the legacy of which we can still see today in houses such as Uppark. 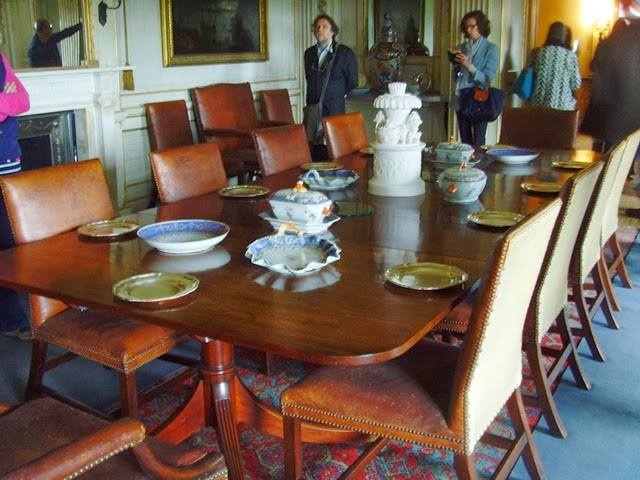 Ceramist Robert Cooper (centre back) in the dining room at Uppark
One of the stories we heard on our visit was that in 1780 fifteen year old Emma Hart had reputedly danced naked on Uppark's dining table to entertain Sir Harry Fetherstonhaugh's  male guests. It was this story, which chimed so discordantly with our modern knowledge of child sexual exploitation, coupled with the cannibalistic imagery of H.G. Wells' 'Time Machine', in which his time traveller refers to the childlike Eloi as 'delicious people', that stuck in our minds as we went home to work up our own 'modest' proposal. 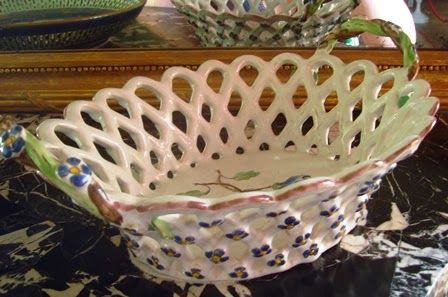 Mid 18th century Sceaux faience dish - tin glazed earthenware
with hand painted floral decoration
What we submitted was a proposal to combine our craft disciplines of ceramics and basketry (the upstairs/downstairs of the craft world?) to weave a large ceramic basketry dish, reminiscent of an 18th century Sceaux faience basket in the Little Parlour at Uppark, which would re-contextualise the relationship between Sir Harry and Emma Hart.
We titled it 'Dish of the Day: chicken in a basket' - playing on the multiple connotations of the word dish; shallow serving vessel, a serving of food, an attractive person, scandalous gossip and, in modern US slang, destroyed reputation.  'Chicken in a basket' not only got in an actual reference to basketry - but also to pretentious fast food and sleazy under-age sexual entertainment.  We knew very little about Sir Harry or Emma Hart at this point but felt instinctively that our dish would somehow interweave their story with modern day slavery and the world-wide trafficking and commercial sexual exploitation of women and children. 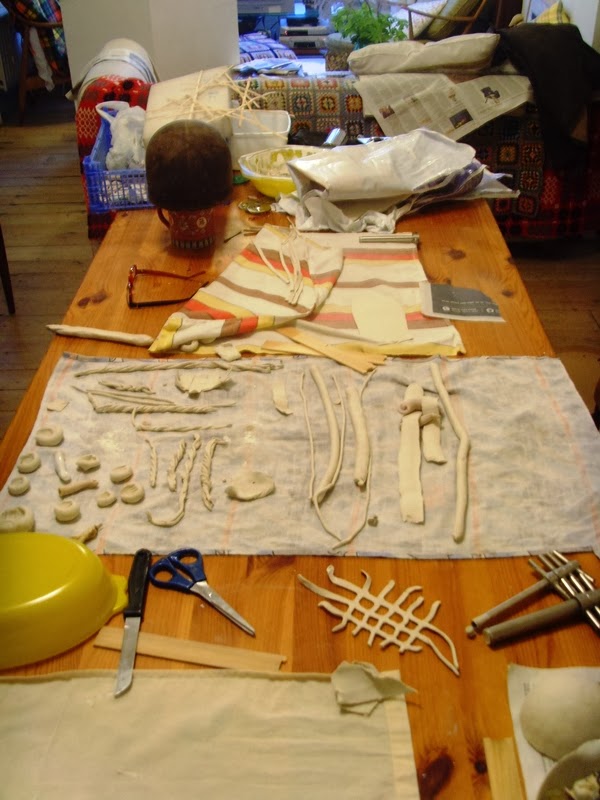 Making a start on 'Dish of the Day' on our dining table
The collaboration would also be a challenge for both of us. We'd never worked together before and our ways of working are very different. Though we each have our own studio neither of us wanted to work in the other's space so we decided to work on the dining table in our living room at home.  A recipe for domestic conflict in the making? Time would tell ...

Posted by stella harding at 07:40 No comments: