THE KNITTING AND STITCHING SHOWS 2015

It's a real privilege to have been invited to exhibit in my own gallery at the 2015 Knitting and Stitching Shows.  The shows take place 7-11 October at Alexandra Palace, London, 12-15 November The Royal Dublin Showground in Dublin, Ireland and 26 -29 November Harrogate International Centre, Harrogate, Yorkshire, UK.

I've titled my gallery SECOND NATURE - thinking around ideas of re-use, repurposing, recollection, repair, redundancy, re-appropriation and all the ways in which we give new life and meaning to quite mundane, overlooked or obsolete materials.  It's also about how all those small acts of repetitive hand-making over time make their mark on us as we make our mark with them - just as walking a particular pathway leaves an impression on our minds even as our footsteps help mark out the path. Or, I should perhaps say, how my materials and use of basketry techniques have marked me and my thinking about them in the process of developing the work.

Here's a few details to, hopefully, intrigue and excite. 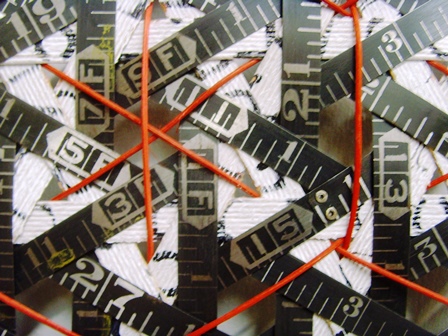 Detail from KEPLER'S SNOWFLAKE: vintage steel tape measure, spun paper tape, rattan and rivets - 75 cms diameter approx.  Johannes Kepler was a seventeenth century mathematician and astronomer who gave his employer Rudolph II an essay on the six cornered snowflake as a Christmas present - because, as he said of the snowflake, 'it falls from the heavens and looks like a star'. 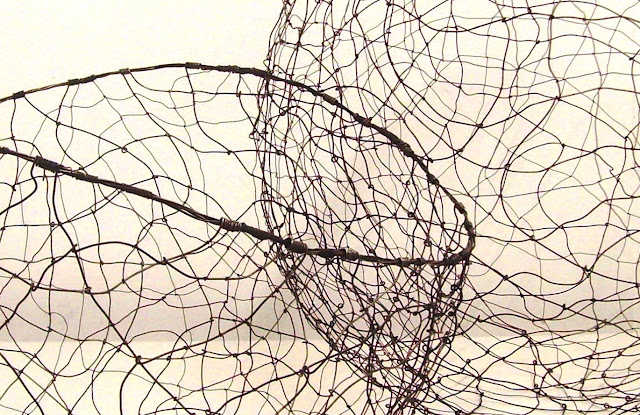 Detail from CRUCIBLES.  I've also been working with a material that fell from the heavens - iron. Or, actually, in this case carbon steel wire which rusts exquisitely when left out in the rain. 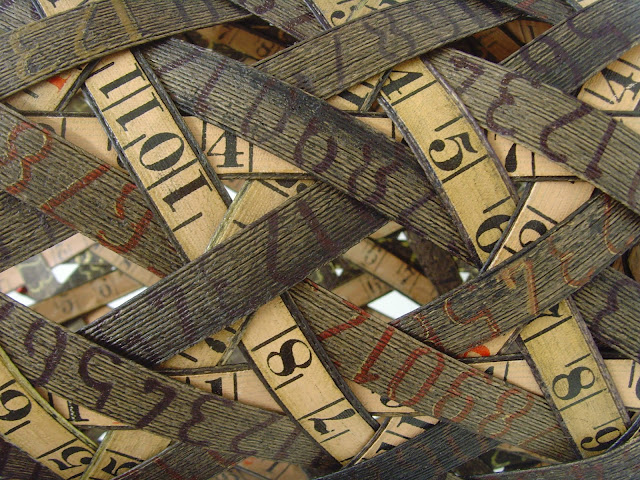 Detail from GEO-METRIC: linen tape measures, spun paper tape and rivets.  But back down to earth I've also made a large plaited basket from old linen surveyor's tapes - the sort that were used to measure out land, cricket pitches and the like - before they were made redundant in the UK after metrication. 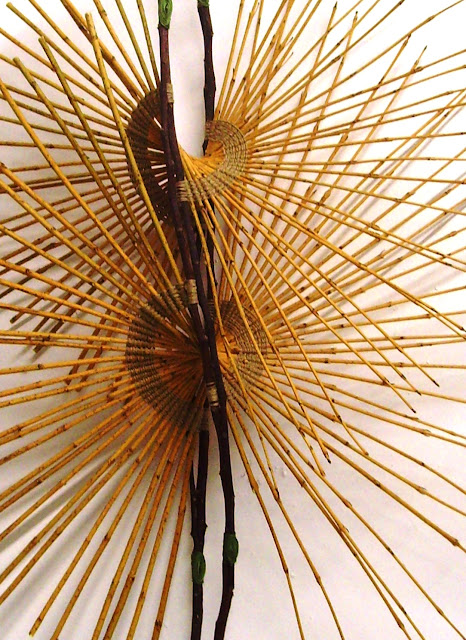 Detail from SUN BLOOM - dogwood, apple and rattan.  I've made several more of my 'Bloom' series; this one from green dogwood - faded to a soft buttery ochre - a recollection of ripened seed-heads drifting in slanting sunlight. 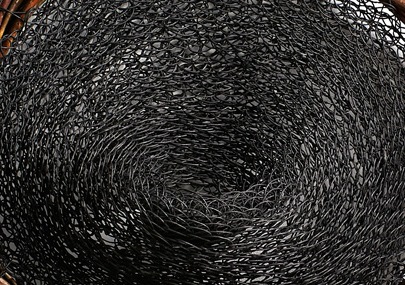 Detail from DARK MATTER: paper twine and willow.  So I drift from waxing lyrical about natural phenomenon at the macro and micro level to the intense dark spaces that are another side.
I've realised that much of what I make comes in two sections: two halves that make a whole or two layers of weave that combine and contrast.  That, I suppose, is the nature of my making - that I'm drawn to dualities which remain distinct but have to be woven/knitted/stitched together.  Perhaps I'll see what happens next if I pull them apart ... 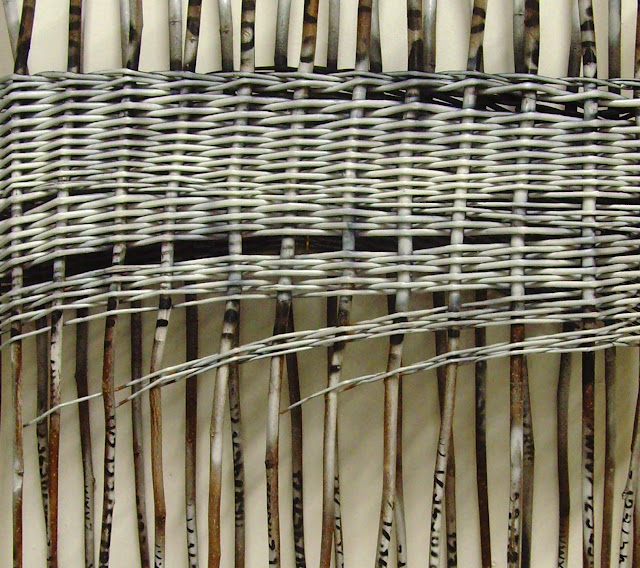 Detail of MYTH: painted hazel and willow, 140 x 40 cms.
I look forward to seeing you there - please say hello.
Posted by stella harding at 07:58 No comments: