LETTER LINES: Maggs beneath the covers #5 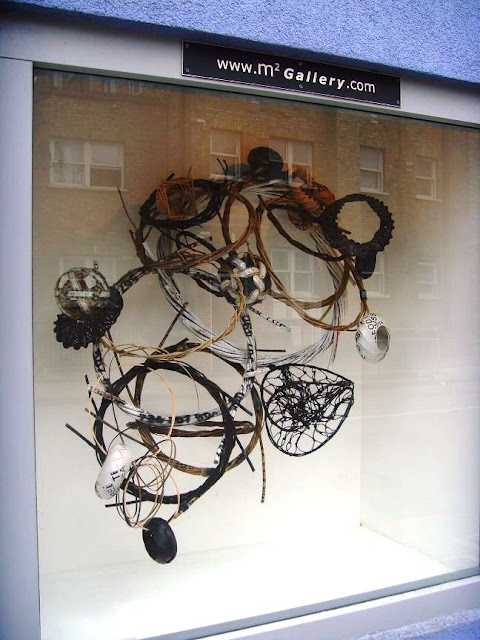 On July 3rd 2012, the day after the trial began in Turkey of Professor Busra Ersanli and her 193 co-defendants, my piece for 'Maggs Beneath the Covers' was completed and delivered to be photographed prior to the exhibition opening on 20th September 2012.

I'm time travelling now, criss-crossing historical and social space.  My lap top is a portal to the multiverse - a worm-hole through the warp and weft of epoch making social events and my craft of basketry has become a time-machine.

It's 1564. A paradigm shift has occurred in the medieval mind-set and Europe is teetering on the brink of modernity.  In reaction to the rise of Protestantism, the counter-reformation is underway and in Venice the book, that in two years time Francesco Ghesi will take with him to the prisons of the Roman Inquisition, has just been published using the latest innovations in print technology.  Made possible, in part, by alchemical experiments in the composition of lead alloys the print revolution has been propelling the communication and rapid spread of heterodox ideas - including the teachings of Luthor and Calvin and Copernicus' theory of the heliocentric universe.  Roman Catholic orthodoxy and the power of the Papacy is under threat.  The old world order is being turned upside down. 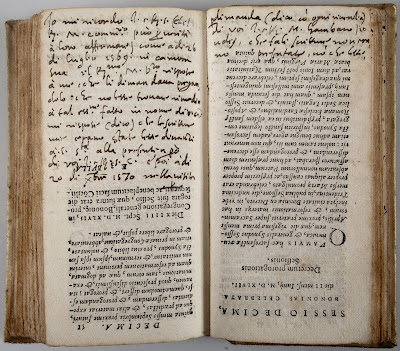 I thought about Ghesi having turned his edition of the Canons of  the Council of Trent up-side down and back to front.  Surely not a unconsidered act.  It seemed to me a purposeful gesture of defiance and spoke of a determination to find an alternative perspective from which to write his defence.  Of course, when paper was a scarce, expensive commodity this would have been a not uncommon practise.  It's the particular cultural context that opens a space for a different interpretation.

Released from detention on July 13th 2012 pending a new trial in October, Busra Ersanli spoke to the world's press of the day in October 2011 when she was arrested and "my world turned upside down".  Devastating no doubt to find oneself facing a sentence of 15 - 22 years imprisonment if convicted. 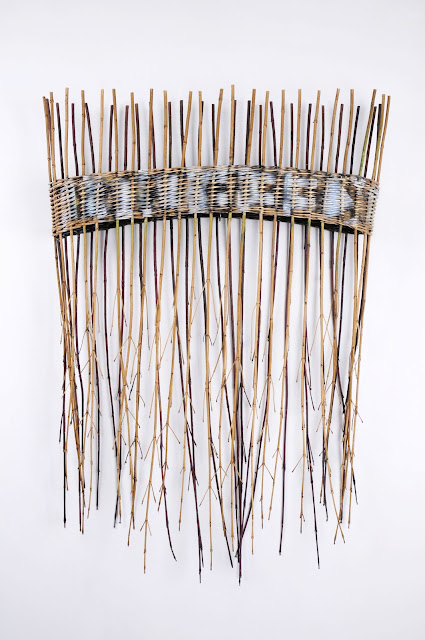 I was taken back to 2004 and a body of work made for an exhibition 'Passion' with fellow basket maker Suni Lopez, when I'd first turned my basketry up-side down and began to write on the lines of the weave.  A small mark in the development of my own personal language and one that I've often repeated since.  Writing the weave another way round.   Though I might upset a few die-hard traditionalists mine is a very small, safe, act of topsy-turveydom. 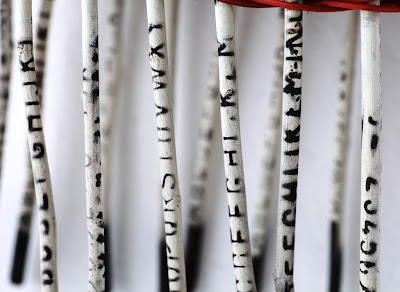 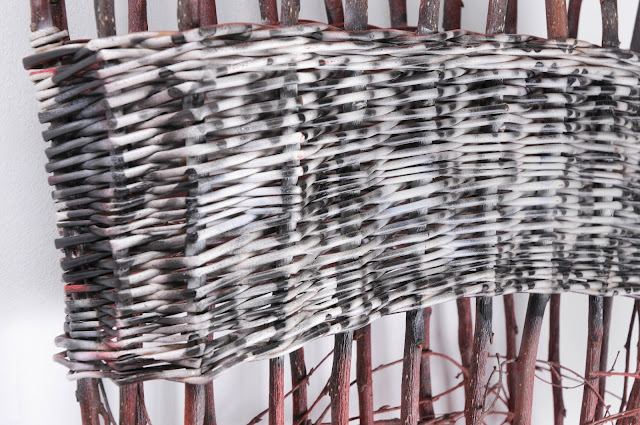 
Returning again to 1564.  Galileo is born and will subsequently provide the empirical proof of Copernicus' theories.  This is also the year in which the Council of Trent, first convened in 1543, authorises a revised version of the Index Librorum Prohibitorum - a list of forbidden books, to be administered by the Roman Inquisition with the aim of regulating the output of printers and controlling the spread of heresy.  Heresy, from the Greek word for choice, is redefined to mean any belief that conflicts with Catholic dogma.  Many convicted heretics will suffer death by fire or life imprisonment and important works by mathematicians and astronomers, such as Galileo's 'Dialogue Concerning the Two Chief World Systems' and Johannes Kepler's 'Epitome Astronomiae Copernicianae' will later appear on the Index.

I began to wonder, did Ghesi's text come at a conjuctural moment when many interconnecting social systems - scientific, technological, philosophical, political, economic, cultural  - gradually began to shift and realign.  Could he be regarded as one of the first prisoners of conscience of the modern era? 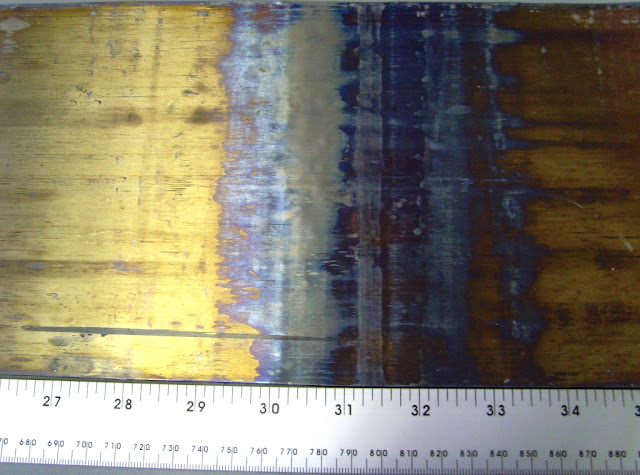 9 kilos of pure lead sheet recycled in Welwyn Garden City - the home town of Hertfordshire Basketry (www.hertsbasketry.org.uk ), a group I joined in 2007.

Back in May 2012 I realised I had to weave, not with paper - perhaps the more obvious, more familiar choice - but with lead.  A new material for me - I'd little idea where to source it or how to work it but I was determined to write the texture of my piece not between the lines of printed lead type face as Ghesi had done but directly onto and into lines of lead.  In this way I would make visible that element of the craft of printing that had changed the world when it was invented by Guttenberg in the fifteenth century.  I put out feelers amongst local artists and found, right opposite my studio on Creekside, some friendly metal-workers who pointed me in the direction of a local supplier of re-cycled pure lead and gave me a crash course in how best to cut it - very carefully!  Lead is notoriously toxic and, due to fears for Health and Safety, its use is now banned in many art colleges.

The lead was heavy and expensive relative to more traditional basketry materials and I couldn't afford the luxury of time or money using it for prototypes.  Having chosen the material I would also have to chose an appropriate basketry technique: a weave that was economical in its use of material not just in terms of cost but more in terms of my ability to actually lift the finished piece.  The weave I chose involved having to cut the lead into 1 metre long, 1.5 centimetre wide strips. Wearing a mask and surgical gloves, using a Stanley knife and a steel rule, I first scored 'guidelines' onto the lead sheet in much the same way medieval scribes had scored the vellum of their manuscripts with a stylus and a straight edge (see Tim Ingold, 2007, 'Lines: a brief history', for more on the relationship between letterlines and guidelines in the development of printed text).  But unlike the scribes I then had to cut right through the lead.  It was slow, heavy, painstaking work.  There was sweat as I scored, pulled and tore along the open wounds in the soft metal, tears of frustration when the line veered off true and blood and band-aid when the knife occasionally slipped.

Unlike many basket makers I rarely use a knife and certainly not a Stanley knife - the short, angled blade is considered too hazardous and I was warned against it by several tutors.  Better to use a curved 'picking' knife or the longer-bladed Opinel that I occasionally use for 'slyping' or 'scalloming' willow.  Over the four days that it took to cut the strips I was also reminded of my first summer job as an art student in the late 1960s, working in the packing department of Stanley Tools in Sheffield, spending hour after hour, day after day, boxing up Stanley knives by the dozen.  I've had an ambivalence to them ever since!

This preparation time also brought home to me that one of the things I love most about basketry is its minimal reliance on tools or equipment.  My hands are my main tools and so the weave becomes, for me, a form of hand-writing: personal, intimate, idiosyncratic, flawed, sometimes indecipherable, hopefully unmistakably my own.  Reading their handwritings from prison I felt a connection with Ghesi and Ersanli.  I can't understand Ghesi's Latin or feel Ersanli's situation but I can see their human hand in the words.  These are not depersonalised ciphers in a oppressive dehumanising system.  They are the marks of real people experiencing oppression at first hand.

Back in 1921 PEN International (www.pen-international.org ), a global community of writers, was set up to campaign for the freedom to read and to write.  Since 1960 its Writers in Prison committees and Rapid Action Networks, co-ordinated  by 145 local centres such as Englishpen ( www.englishpen.org ), have been campaigning to free thousands of imprisoned writers around the world.  Many are held without trial and in contravention of their human right to freedom of expression as recognised in international human rights law.  The words of John Milton from his 1644 'Aeropagitica', quoted on English-pen's website; "Give me the liberty to know, to utter, and to argue freely according to conscience, above all other liberties." is a reminder that we still can't take this freedom for granted. 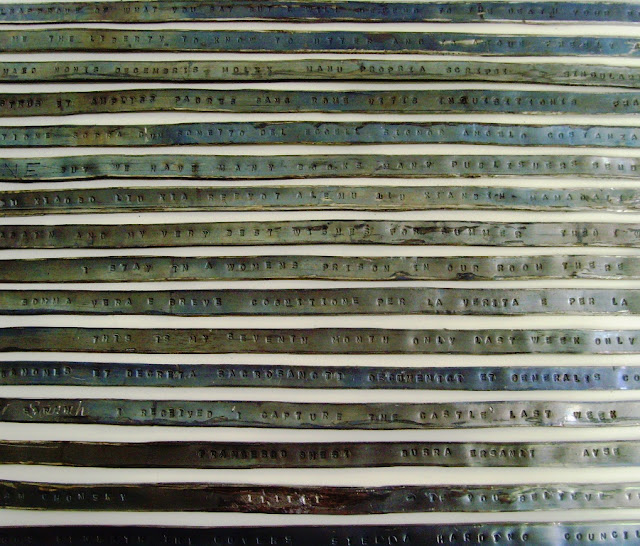 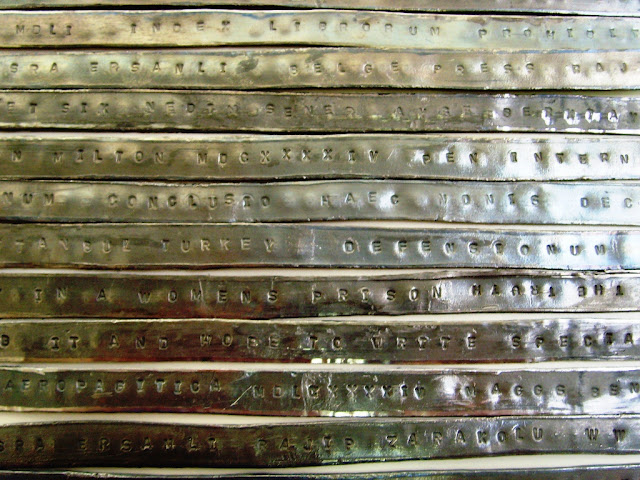 Once the lead was cut I began the slow, repetitive job of printing text into it using metal stamps.  Spelling out lines from the book, Ghesi's defence and Ersanli's handwritten postcard from a Turkish women's prison interspersed with quotes from Milton, Voltaire and Noam Chomsky on the subject of freedom of speech took eight days.  I also added the names of other imprisoned writers, poets, publishers, bloggers and human rights activists including the 2012 Nobel Peace Prize nominee, Rajip Zarakolu - writer and founder of Belge publishing house, who was arrested in Turkey at the same time as Ersanli. 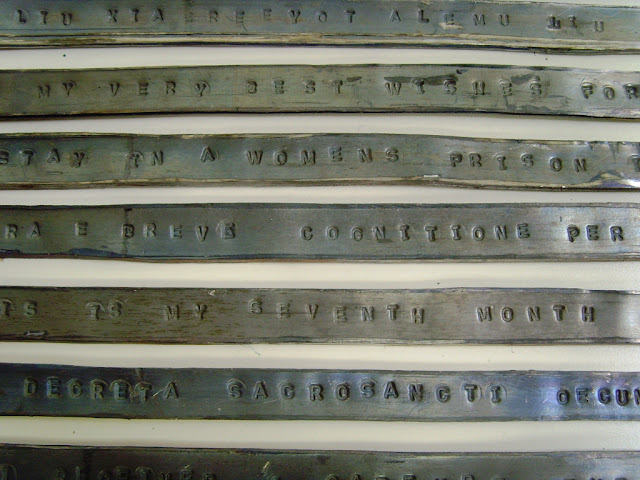 It was a period of concentration and contemplation as I lifted each letter stamp in turn from the boxed alphabet, positioned it carefully over the lead and hit it twice, firmly, with a lump hammer.  The sensuous rhythms, sounds and cool, hard yet softly yielding touch of this process were eons away from my usual, more immediate, stencilling and spray painting - like the difference between the ancient Roman practice of sending messages inscribed on lead tablets and today's tweet from a smart phone.  Taking time, I felt very much in touch with my materialised thoughts through the slow, subtle texture of this process. There were irregularities and imperfections - the irrevocable marks of my un-skilled metal work which became an aesthetic device to signify humanity - small lapses of concentration, a slip of the tired hand, subtle differences in pressure over time,  and even the odd 'typo'! - the lead told it all.

Eventually though, these storylines were ready to be woven together and the final structure of the plot revealed ...


Posted by stella harding at 05:54 No comments: