A star is born

Now that 'Practical Basketry Techniques' has taken its first steps out into the big wide world I feel I can give more space on this blog to tracing my own steps and gathering my thoughts as I move on with other projects.  I've been working on a few new lines of enquiry recently, one of which has involved picking up strands from previous work. NOVA 2012. Photo: Sylvain Deleu
One of the strands is my fascination with this hyperbolic paraboloid structure.  It lends itself to different configurations and I'm always wanting to explore new variations, scales, meanings and contexts. I was surprised and thrilled to see that this image of NOVA, my 'portrait in the making' had been used in 'Crafts' magazine as an illustration for the Craft Council's director Rosie Greenlees piece on 'Craft in an Age of Change'.  Reflecting on Sylvain Deleu's image with a blurred human figure in the foreground and a glimpse of a sunlit green world in the background made me want to retrace the making process of this piece.  NOVA came from nature and is an expression of an aspect of my nature yet hangs suspended between both.

The challenge we, the 17 emerging makers from the first cohort of the Craft Council's Hothouse programme, set ourselves for the exhibition 'Portraits in the Making' at Pitzhanger Manor Gallery and House in 2011 was to respond to architect and collector John Soane's reference to Pitzhanger as 'a sort of portrait'.  We left the interpretation wide open but self-portraiture was always an option.  Each of us  started our making process by filling in the dots of an I-statement, 'I am a ...'  Making such a personal statement can be a challenge in itself.  Many makers, when writing their artist statement, feel more comfortable with the third person passive voice which allows them to stand at a slight distance from their own words and actions.  No grammatical sleight-of-hand here though, no blurring of the boundaries between the speaking subject and the self-made object.  We had to stand out in full view.

My I-statement was 'I am a ... STAR'  (my name means 'star' in Latin).  It's been a bit of a challenge all my life.  I always liked the association with the twinkly, shiny things in the night sky and even with the many different ways these objects are represented in verbal and visual imagery. The associations with stardom and celebrity were more problematic.

But this exhibition was our opportunity to shine. 'Don't hide your light under a bushel!' the old proverb advises.  Furthermore, my lucky star was winking at me on the first site visit when we were told that it would be possible only to hang works on existing fixtures as Pitzhanger is a Grade I listed building. 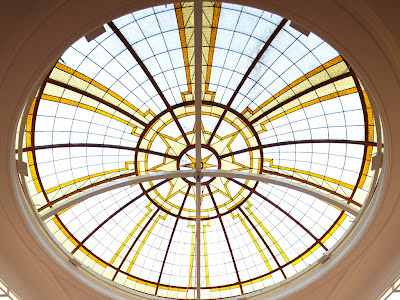 There in the central domed skylight of the gallery was not only a brilliant star burst but, right in the middle, a hook!  I had my reference point.  Soane was noted for his pre-occupation with light and space that had sparked a revolution in architecture and I also had a literal hook from which to suspend a large scale structure.

I was right in the middle of making and writing up projects for 'Practical Basketry Techniques' with little time to develop a completely new line of work on the scale required.  Madeleine Furness, of the Craft Council Maker Development team has a great phrase for just such a situation - you have to 'manage your expectations'. In this case, make something that isn't overly ambitious given the time constraints .  I hadn't made a large suspended structure before but I had made several wall-hung hyperbolic paraboloids on a smaller scale.  There wouldn't be anywhere I could test a larger prototype. Getting the piece installed would require a scaffolding tower and several willing gallery assistants  - so it would have to work first time.  With the help of Vanessa Moore, the exhibitions officer, we calculated all the measurements and the buildings officer okayed the weight restrictions.  I just needed a lot of big willow. 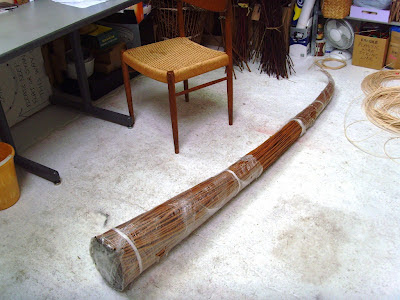 A bolt of 7' buff willow on my studio floor 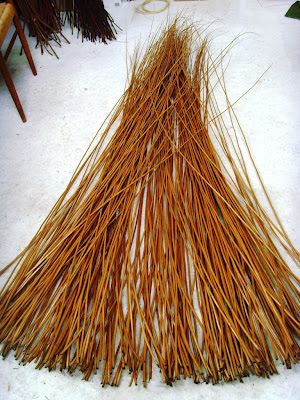 300 rods and I needed 200 of the best - time to get sorting.  I also needed to straighten them.  Willow has no 'memory' -  the rods will remain straight once they have been gently coaxed into shape.  It was very time consuming - you don't need to know how many hours!  To avoid repetitive strain I worked on other smaller pieces for my 'Cabinet of Curiosities' in between straightening stints. 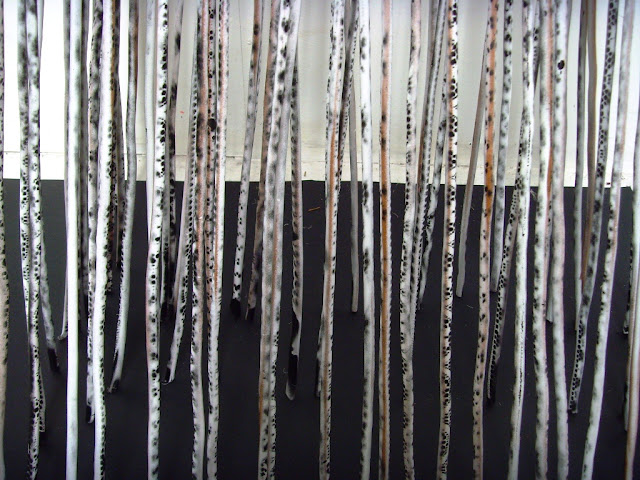 Then it was onto the fun bit - spray painting the rods.  Spacing them all out like this  to dry reminded me of a plantation in France I'd used as inspiration for another piece.  I love the making process - it sparks off such a myriad of connections, associations and ideas for future projects. 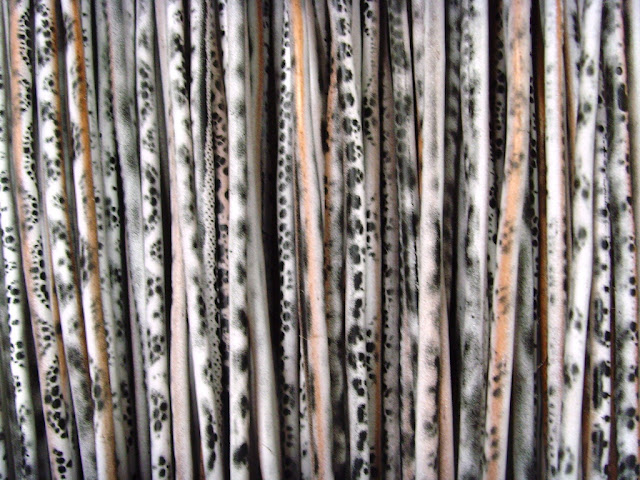 Then there was more sorting and choosing: this time 180 of the best painted rods.  'Choosing' is a bit of a skilled process in willow work - the eye gradually adjusts to spot the weak, cankerous or discoloured - survival of the fittest! 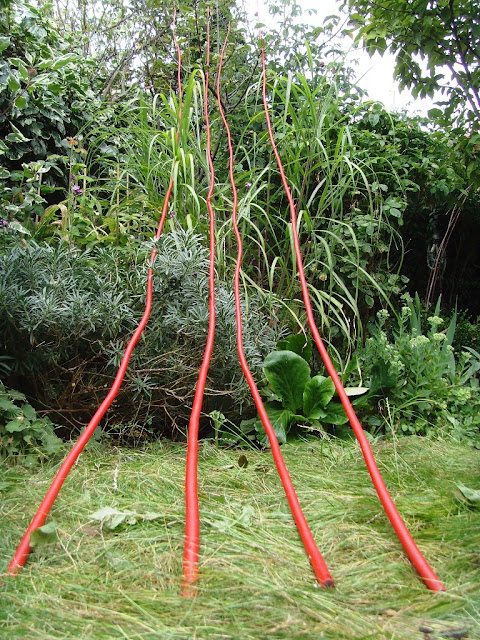 These are my chosen 'desire lines'.  We are star-dust - our blood contains the iron from a zillion dead stars. Had to paint them in the garden as the 4m rods wouldn't fit into the car to get them to the studio.  No time to mow the lawn last summer! 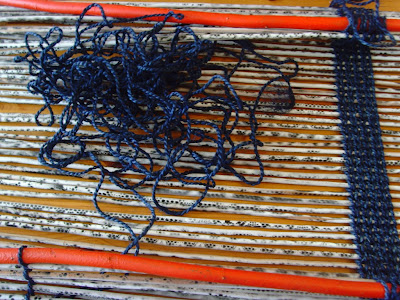 I had to return to weaving on the living room table for the same reason.  Irksome, as I was paying rent on the studio all the while.  Made me smile though when I read another maker's blog recently and she was commenting on how work produced in a domestic environment has a tendency to be domestic in scale and ambition.  An interesting point. (see www.vandacampbell.blogspot.com) 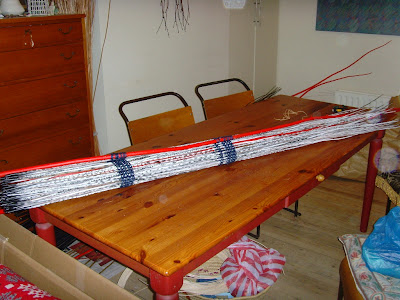 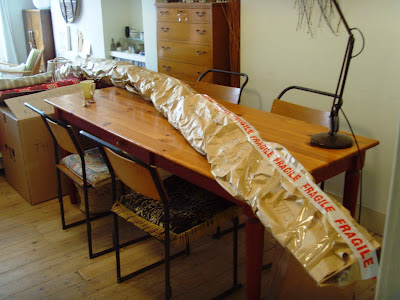 All packed and ready to go - hope the van's big enough. 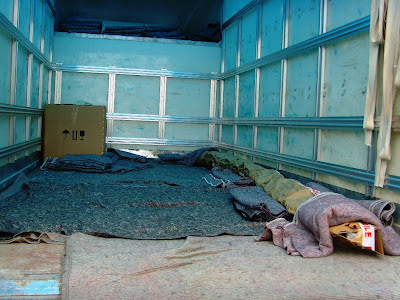 Just got it in with mm to spare. 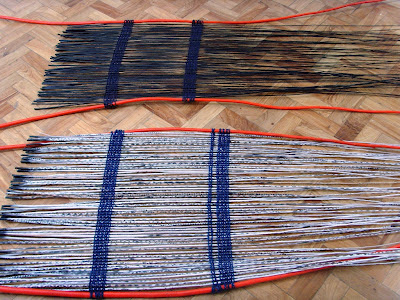 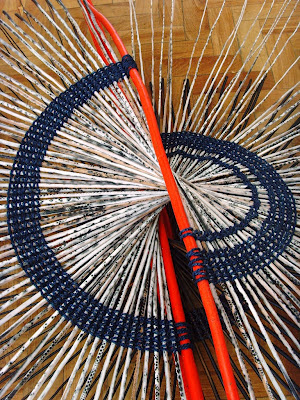 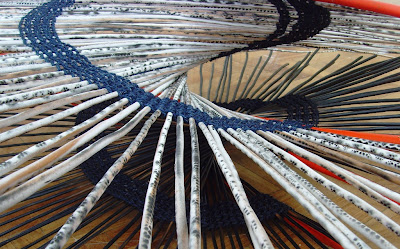 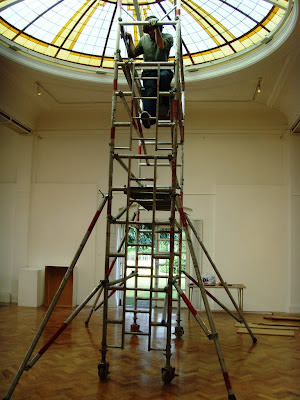 I don't have insurance to climb scaffolding towers - shame!

Emerged! A perfect fit.  At 5.50 metres high it skimmed the floor with centimetres to spare.

NOVA - the lighter side, brighter than a thousand suns. Photo: Sylvain Deleu 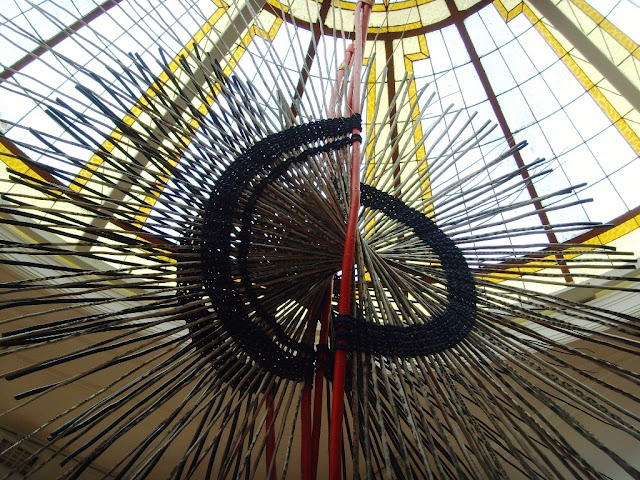 The name:  NOVA  literally means 'new', or, in astrophysics refers to a nuclear fusion of hydrogen and helium on the surface of a white dwarf star causing an explosion of energy which makes it appear to shine extra brightly for a period before fading over time ...........  de stella nova.