After a great time was had at the book signing (and selling!) on publication day at the City Lit - attended by the chair of the Basketmakers Association Bunty Ball - the Practical Basketry Techniques roadshow headed South to Creekside in Deptford for a POP-UP Basketry Exhibition and Book Launch Party at ART HUB gallery.  Hosted by myself and A&C Black (now Bloomsbury Visual Arts) the event featured work by contributors to the book and members of Basketry Plus http://www.basketryplus.org/ 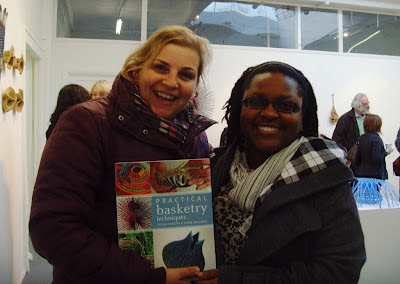 All the best exhibitions open with afternoon tea and home-made cakes these days -  a trend set by Julia Mannheim of the M2 gallery in Peckham.  I opted for tea and cakes when my mathematics inspired 'Show Your Working Out' opened there in March 2010.  See http://www.m2gallery.com/

What better way to launch a basketry book than to gather together some of the contributors' baskets,  including the stunning 'Peacock Pod' by Mary Crabb as shown on the front cover, invite friends and fellow basketers - several of whom had commented on my drafts, tested 'recipes' and shared useful tips - and all get buzzy on caffeine and carbs.  After all, that's what the co-author and I had done most mornings at the local cafe when working on the projects. 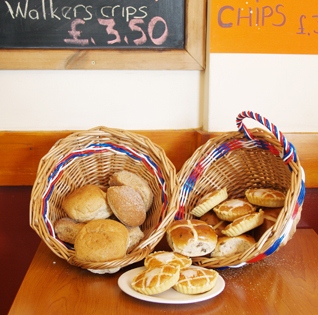 See the recipe for a Gathering Basket in Practical Basketry Techniques
(perhaps I should introduce whoever wrote the menu to Karen and Valerie!)

One slight problem - baking not really my thing.  M2 gallery artist to the rescue.  The last show I saw there was by maker extra-ordinaire Laura Marley and she had baked the best cake ever -  Brack.  At least, I think that's what she said because when I took it out of the oven I wondered if I'd misheard.  Mine looked like a Brick. 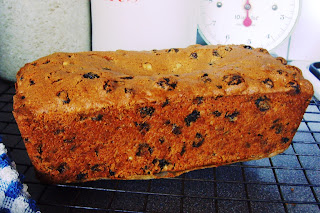 TIP: don't be tempted to open the oven too soon to check if it's done - this may cause the cake to sag a bit in the middle - then it'll look even more like a house-brick.

But it tasted absolutely fantastic and the recipe is so easy, it's the nearest baking gets to making mud pies in the garden.  Here it is for all those who've asked - only slightly tweaked from the original Bero Brack recipe.

TEA CAKE  (NB these are imperial measures - it's an old recipe)

1 lb mixed dried fruit (I just bought a bag of mixed fruit as I like the bits of candied orange and lemon peel too but you can use a mixture of sultanas, raisins and currants - whatever)
6 oz soft brown sugar (I'm sure other sugars, such as Demerera work just as well)
5 fl oz hot strong tea (I have wondered what it would taste like with Earl Grey...)
1 large egg
8 oz self-raising flour

1) Mix together the dried fruit and sugar.  Pour over the hot tea.  Cover and leave to soak over-night.

2) Beat the egg into the fruit mixture which should have plumped up nicely.

3) Stir in the flour. The mixture will resemble damp top soil - don't despair!

4) Grease and line the bottom of 2lb loaf tin with baking parchment.

5) Spoon in the mixture.  Bake for 1 and a half  to 1 and three-quarter hours until firm (or until a skewer comes out clean).

6) Cool.  (I didn't realise at first that this was an instruction - it should perhaps read 'leave to cool'...)

But this really is the coolest, most laid-back cake recipe ever.  Apart from chocolate crispy cakes which are my usual no-bake standby.

2 medium sized bars of dark chocolate - melted.
A few handfuls of wholewheat bran flakes - crushed very slightly.
Dark chocolate chips - as many as you like.

I confess that, flushed with the success of the Brack, I did also go on to make Coffee and Walnut Cake and  scones.  Everyone told me they were delicious.  I wouldn't know as I was so busy signing books that by the time I'd sold out all the cake had gone.  Never under-estimate the art/craft-loving public's capacity to consume cake!  They seem to be rather fond of basketry books too. 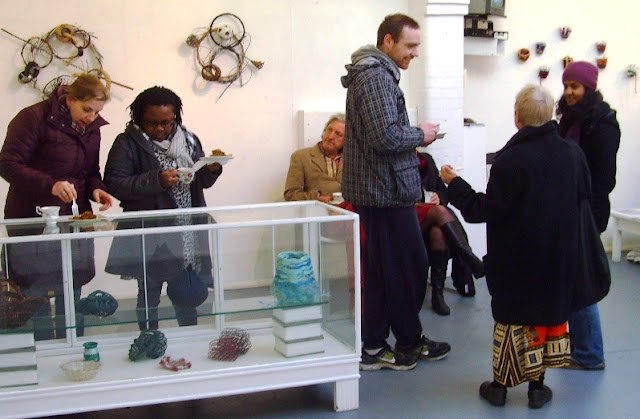 A party celebration - sharing food with friends -  is a fitting way to mark the publication of a new basketry book.  Basketry has a long association with the gift of food, so fundamental to human social activity, and gift baskets were often made to mark significant rites of passage such as births, marriages and deaths. 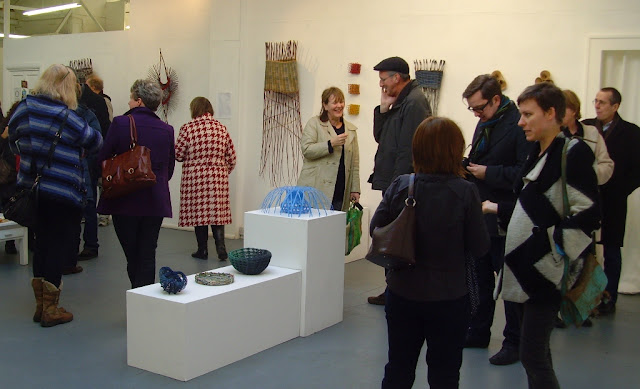 I've had some lovely emails giving feedback on the book:

'A good looking, good natured book ...',
'It's much bigger than I expected ...'
'The book is splendid, very clear, excellent photos ...',
'I must say I had not expected it to be so large ...'
'It looks very fresh and lovely and has a nice tone ...'
'I was reading your book in the early hours of the morning and have resolved to make a wound core object  ...'
'It's a big book Stella!'

They say you shouldn't judge a book by its cover - I'm so glad this one isn't judged solely by its size!
Posted by stella harding at 04:36 No comments:

I really enjoyed myself last week setting up a showcase at the City Lit to publicise the book signing I'll be doing there on Thursday 16th, 1-2pm, Room 414, Fourth Floor.  It took me longer than expected as I had so much interest from people coming up and asking questions while I was doing it.  It was great to have the opportunity to talk about the book and the range of basketry courses on offer at the City Lit. 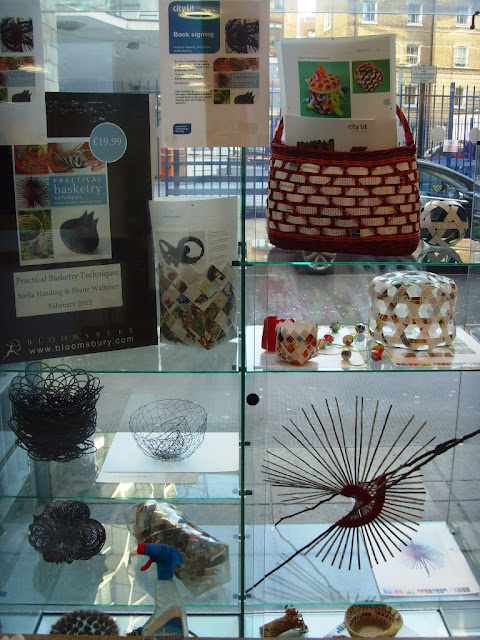 It took longer than expected to clean the glass too!

I'd spent time in the studio beforehand making some plaited pieces from the final set of book proofs.  They were printed on such good quality glossy paper that it seemed a shame not to use them.  What better use than to make basketry to show some of the techniques illustrated in the book.  I did include a few extra plaited items that are not in the book just because I love plaiting. 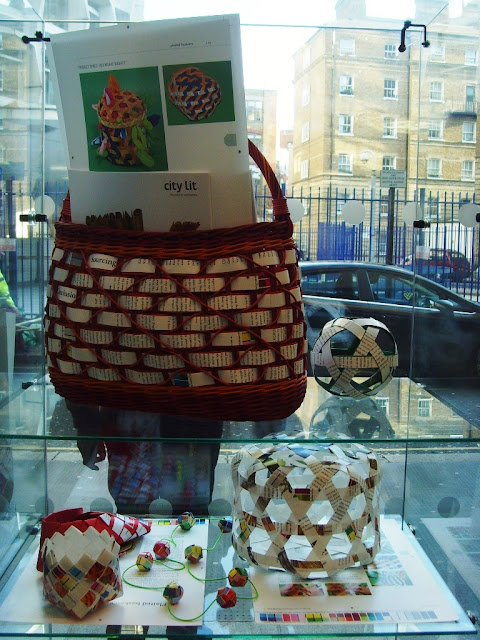 I'll be making more of the bead-like balls.  So satisfying to make and I love the riot of colours.
The red stake and strand basket was a prototype that I made in 2003 for the final show of the Part One City and Guilds Basketry course  that I began in 2001.  Most of my other show pieces were non-functional as I'd spent much of the course trying to avoid making actual baskets.  But after several sessions having to make a dyed centre cane shopping basket to someone else's recipe I decided to design one of my own.  I love vintage baskets from the 1940s and 1950s and the interwoven wavy-line design was inspired by one in my collection. 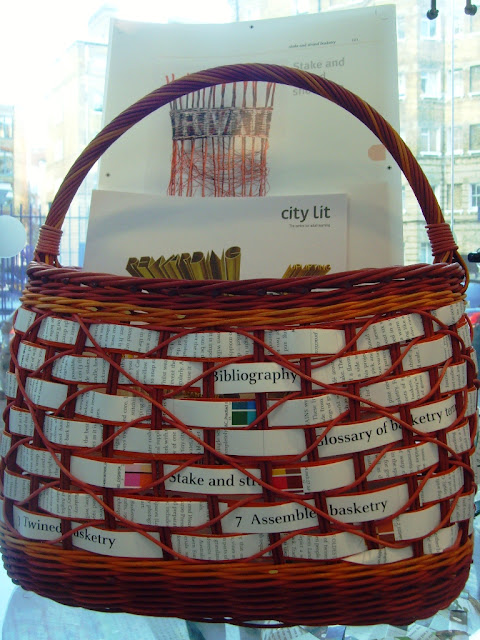 Here it is with proof pages from the book temporarily woven through it.  It just the right size for a City Lit prospectus - or a copy of Practical Basketry Techniques!
It's something of a contradiction that I ended up writing basketry 'recipes' for the book (traditionally, the instructions for making baskets were known as recipes). Following a recipe for someone else's design is just one way to learn the basic techniques but not the only one.  It is quite a useful discipline though to record the materials, the techniques and the making process along with what works and what doesn't even if it doesn't end up as precise recipe.  I got several commissions for this one in different colours so was glad I'd kept a record.

Actually, here's a confession, I've never been very good at following recipes be it for baking cakes, knitting or crocheting sweaters or sewing-up a dress pattern.  I've always preferred to make my own designs - sometimes with 'interesting' results.  There's a world of difference though between a happy accident that leads to a delicious creative breakthrough  and a disastrous, half-baked innovation that gives you indigestion - my attempts at free-form baking tending to veer towards the latter!  Making mud pies in the garden was always more my thing.

In the book we demonstrate a range of basic construction techniques that can easily be adapted  to different materials, forms and functions.  These techniques and the tips for working with them are just the starting point.  Some people are of the view that too much emphasis on technique, particularly good technique, can stifle individual creativity, freedom of expression and innovation.  Not so.  A desire for creativity will always seek and find expression - techniques are just a means to an end and the more help you can get from those who have been there before the quicker you can get along and do your own thing.

That's why the City Lit is such a great place for Adult Learning.  Fantastic tutors, a supportive environment with an ethos that nurtures and encourages creativity and lots of lovely, friendly fellow students.  For me this book signing event will be like coming home - to say thankyou.
Posted by stella harding at 04:13 No comments: