UNRAVELLING UPPARK: 2. Dish of the Day


On beginning our collaborative commission for Unravelling Uppark one of the first tasks was to research the period and to find out more about Emma Hart and Sir Harry Fetherstonhaugh.  Who was this young woman, why had Sir Harry brought her to Uppark and what was she doing dancing naked on the dining table?  The research process was helped by the fact that, between September and December 2013, I was fortunate to be offered a residency at Guildhall Library, which, as the Library of the City of London, holds collections on the history of London and its trades as well as the largest collection of food related books in the UK.  The significance of the latter to our project was to be crucial.  But it wasn't long before I became fascinated by Emma's early life and her connection with the Georgian sex trade. 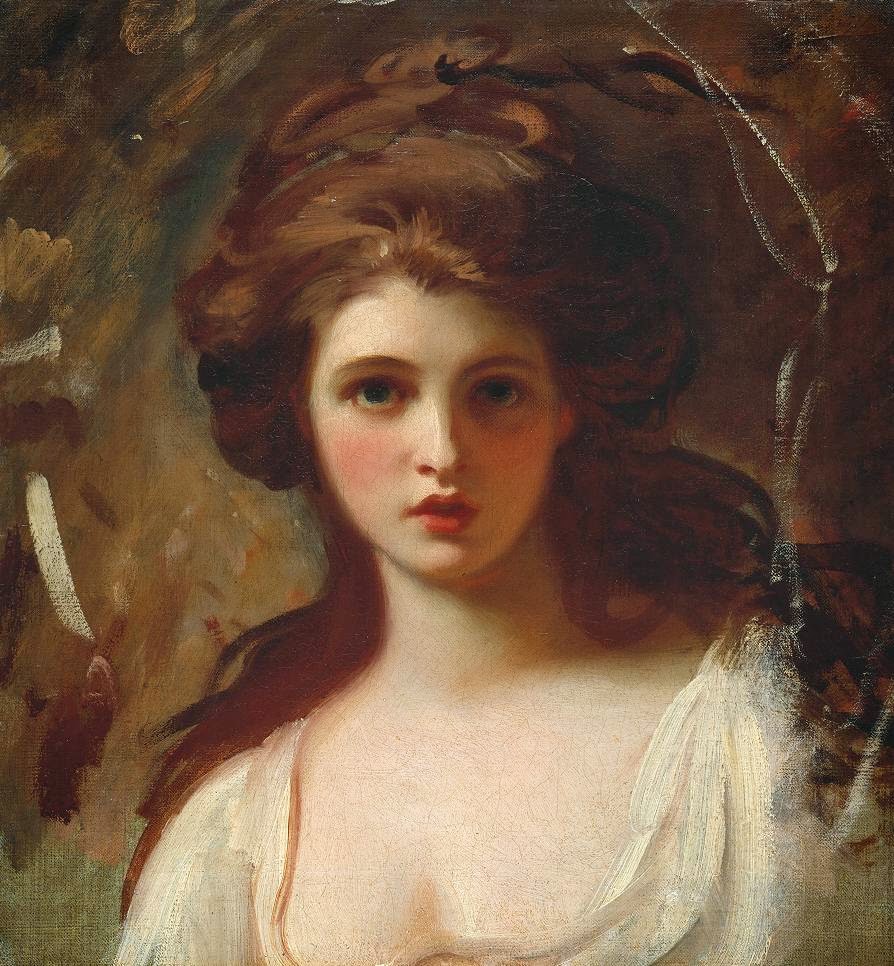 Emma Hart as Circe, painted by George Romney circa 1782 when she was just seventeen, shortly after she'd given birth to a daughter by Sir Harry Fetherstonhaugh. (Tate Britain)

Emma Hart, as she came to be known, was baptised Amy Lyon in 1765 in the parish church of Ness, a mining village on the Wirral peninsula in the north-west of England.  The daughter of a colliery blacksmith, she might have been destined to a life of back breaking drudgery hauling coal to the surface in baskets or perhaps working as a low paid domestic servant.  There were few opportunities for uneducated lower-class women in the eighteenth century and, as there was no legal requirement to pay girls under sixteen, they were widely used as menial labourers - beginning their working lives at around twelve years old.  Even if they were paid, many female domestic servants earned only £5 a year at a time when the average yearly wage for a skilled male artisan was £50.

Amy's father died in mysterious circumstances when she was two months old and she was brought up in the home of her maternal grandmother in North Wales where there were many mouths to feed on a low income.  When she was twelve Amy, like many poor migrants from the countryside, made her way alone to London seeking work.

She was taken into domestic service by a Doctor Budd and his wife but after a few months was thrown out on the street, penniless and homeless.  This wasn't an unusual occurrence.  Young females were arriving in London every day by the wagon-load and the supply of domestic servants out-stripped demand.  If one girl didn't suit another could be easily be found.  The only recourse for destitute girls was prostitution.  In the Georgian period a fifth of London's female population, including children, worked in the burgeoning sex industry which, with an estimated annual turn over of £20 million (multiple billions in today's money),  was more profitable than brewing, the docks and construction combined.  London was the sex tourism capital of Europe. Covent Garden was the epicentre with over 30,000 sex workers openly plying their trade in the surrounding streets. Prostitution wasn't illegal and neither was sex with young children.  Demand for very young girls, especially virgins, was high as sex with a virgin was thought to cure venereal disease and punters would pay 50 guineas for defloration rights. 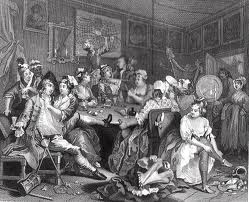 Plate 3 of William Hogarth's 'A Rake's Progress' which depicts a posture moll at the Rose Tavern in Covent Garden.  The young harlot in the foreground is removing her outer garments whilst the landlord brings in the highly polished pewter platter on which she will perform.

The sex trade wasn't an easy option despite the fact that girls were at least getting paid for what was otherwise often being taken for nothing.  For most girls it was a short life. The majority were dead after five years of disease, alcoholism or drug addiction, bodged abortion, childbirth, violent assault or even suicide.  It's believed that for Amy street-walking, the lowest form of prostitution, was a temporary solution to a short term problem.  Although she would never talk about this aspect of her early life, much of which is shrouded in myth, it's believed that Amy may have first worked in the taverns of Covent Garden where she would have been familiar with the work of 'posture molls' - tavern harlots who performed striptease and lewd postures on large pewter platters to arouse the punters.  It is known that she variously worked as an artist's model, a maid to the wardrobe mistress at Drury Lane theatre in Covent Garden, as a 'goddess of health' (read exotic dancer) in Dr John Graham's spurious Temple of Health at the Adelphi (also known as the Temple of Hymen) and that then, at the age of fourteen, she was taken in by one of the most infamous madams of the day.

Charlotte Hayes, aka Mrs Kelly, ran a string of high-class brothels in St James frequented by royalty and the aristocracy.  Dressed in silks and jewels, elaborately coiffed, powdered and perfumed, as one of Mrs Kelly's 'chickens' the beautiful Miss Lyon would have taken a new name, Emily, and been groomed as a high class courtesan.  As well as the more obvious talents she would have learned the arts of singing, dancing and polite conversation - all for the pleasure of men like Sir Harry Fetherstonhaugh whose name appears in one of Mrs Kelly's account books. 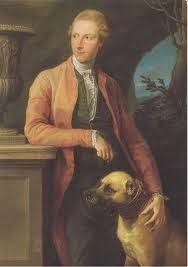 Painting of Sir Harry by Pompeo Batoni,1776, in the red drawing room at Uppark

Sir Harry Fetherstonhaugh was born in 1754 the only child of Sir Matthew and Lady Sarah Fetherstonhaugh.  Aged only twenty he inherited Uppark and a vast fortune on the death of his father who had made his money from the coal trade and his stock in the East India Company.  Spoiled, rich, charming, fun loving - and, by all accounts, a bit dim - Sir Harry was no stranger to sexual scandal. He had been packed off on the Grand Tour after getting a village girl pregnant.  Then, whilst on a debauched spree in Naples with the Duke of Hamilton, he'd seduced a young gentlewoman whose family were paid off to the tune of £300 by the Duke's uncle Sir William Hamilton, the British envoy in Naples - who, ironically, later became Emma's husband. 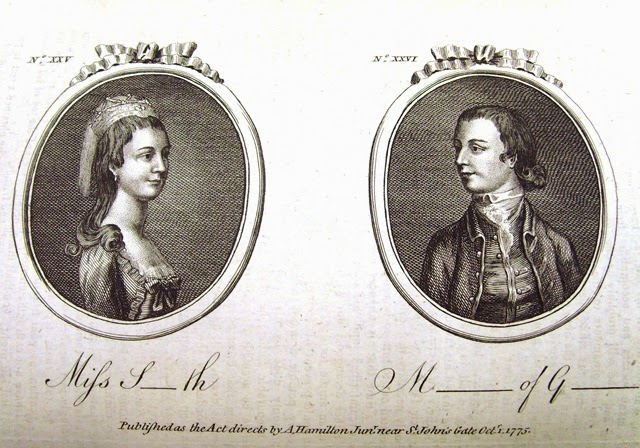 From the pages of 'Town and Country' magazine 1775 - the story of a young Marquis who 'date raped' Miss S after spiking her drink with a sleeping potion.  Having 'lost' her virtue and good reputation she is then forced to become his mistress. Stories such as this fuelled the popular perception of men as sexual predators. (courtesy of Guildhall Library)

Back in England Sir Harry spent a good part of his inheritance - £3,000 in just a few months - enjoying the pleasures of fashionable London society: attending court balls, drinking, gambling and frequenting high class brothels. He was a  regular of the gossip columns of such society magazines as 'Town and Country' and 'Bon Ton' which titillated their readers with salacious accounts of the sexual exploits of aristocratic men.  According to some sources Sir Harry earned the nickname Baron Harry Flagellum for his reputed sexual predilections.  (Posture molls often offered flagellation as a side line.)

At Uppark he gave lavish country house parties - the days spent hunting and shooting and the nights spent wildly carousing.  If the hunting ground was the place to win friends in high places and gain political influence (just as the golf course is today) then the dining room, an innovation of the eighteenth century reflecting a greater emphasis on the elegant serving of meals, was the place to ply those friends with fine food, drink and after dinner entertainment.

Sir Harry employed a French chef, 'service a la Francais' being the height of fashion for the rich in Georgian times.  Nowadays we eat in the Russian style with savoury and sweet dishes succeeding each other in separate courses.  Then the French style dictated that all dishes were presented simultaneously, somewhat like a buffet, with sweet and savoury food laid on the table together.  Though by the mid-eighteenth century a separate dessert course, from the French desservir - to 'unserve', had become increasingly popular in smart circles. 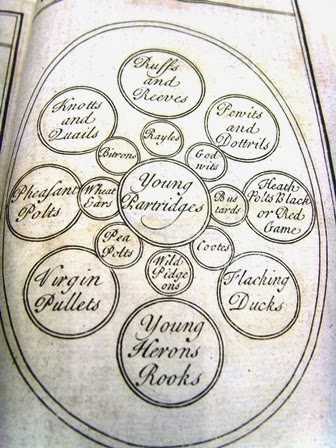 A serving suggestion of small birds from  Charles Carter, City and Country Cook, 1736 - courtesy of Guildhall Library.  Couldn't resist this: shades of Monty Python with the young Rooks! 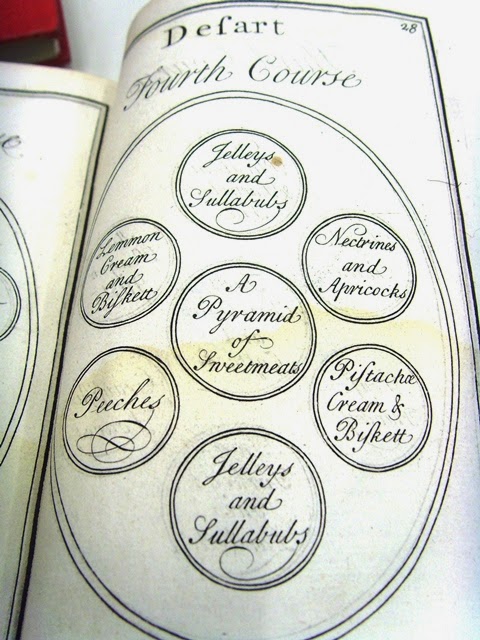 A dessert course of sweetmeats, hot-house fruits, jellies and syllabubs from Charles Carter (ibid).  Desserts using sugar imported from the West Indies - fruit of the slave trade - were expensive luxuries only the rich could afford.
For a large dinner party up to 50 dishes might be arranged in symmetrical patterns - the food decorated with fresh flowers and herbs.  Roasted meats, game, fish, waterfowl, seafood and small birds would be accompanied by vegetable dishes, pies, exotic fruits and sweetmeats (boiled sweets and candied fruits).  Guests would help themselves to as much as they liked of the dishes closest to them or pass portions to those seated nearby.  The food, often having come from the kitchens along long draughty passages, was served either cold or lukewarm.  It was considered déclassé to eat hot food as only the lower classes ate food straight from the fire. (One of Sir Harry's innovations at Uppark was to build the underground passages linking the kitchens with the servery and dining room that inspired H.G. Well's Time Machine - perhaps he preferred his dishes hot!)

We've perhaps become used to thinking of the Georgian era as a time of gluttony and overindulgence, especially by the upper classes.  But food on this scale was more about status and conspicuous consumption than it was about appetite. It was just showing off!  It was a time of great extremes.  The super rich of their day were a small minority and it's easy to forget that the vast majority were often on the verge of starvation. In just a few years the French Revolution would be reputedly sparked by Queen Marie Antoinette's callous comment, 'Let them eat cake'.

It was some time around 1780 that Sir Harry reputedly met Emily Lyon.  Some accounts say he first saw her dancing around the Celestial Bed (couples could pay 50 guineas to have sex in it as a cure for infertility or impotence) at Dr Graham's Temple of Health, others that he hired her for a year from Mrs Kelly - at considerable expense - and took her to Uppark to serve and entertain his male guests at dinner.

Whatever the truth we began more than ever to wonder about the nature of their relationship and Emma's role as hostess at Uppark.  Was she herself the elegant and expensive dessert dish served up once the table had been cleared after dinner and did Sir Harry's guests devour her with their eyes only? 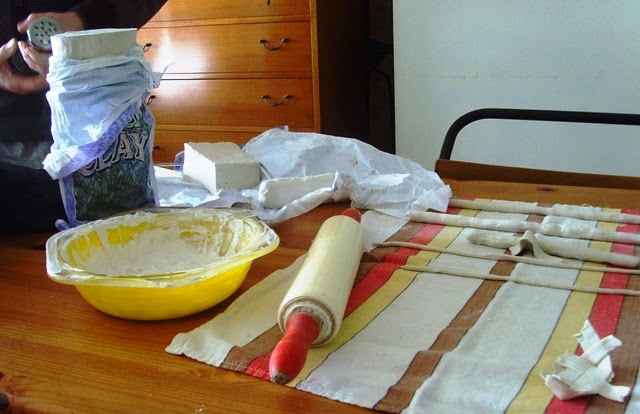 Getting into the spirit of making at home with our collection of vintage kitchenware and a bag of paper clay. Love the 1950s colour co-ordination!

With all this in mind it was now time to clear our own dining table and assemble the ingredients for our dish of the day...


Posted by stella harding at 01:13 No comments: