A MEASURE OF CHAOS


A MEASURE OF CHAOS: my new solo show at the Pound Arts Centre, Corsham in the heart of rural Wiltshire.  It was a privilege to be asked to exhibit for the annual Corsham Festival and I want to say a big THANK YOU to everyone who helped with the show - I thought it looked fantastic. 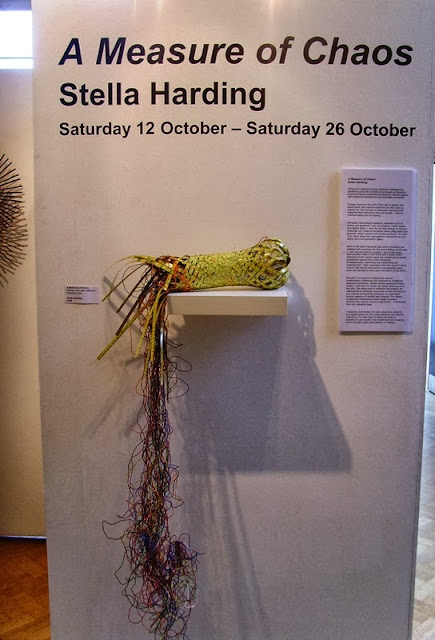 It was such a lovely surprise to walk into the exhibition and see how Celia the gallery technician and Martin the centre manager had displayed the work in the listed Victorian school house which is now the Pound Arts Centre.
My 'happy snaps', taken just before my 'meet the artist' event on Saturday evening, don't really do the show justice. So, for those who couldn't make it to Corsham, here are a few shots of the work in situ - augmented where possible with studio images and close up details. 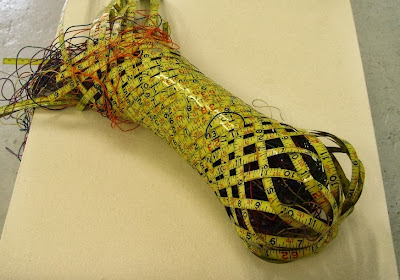 Stella Harding, A MEASURE OF CHAOS, 2013 - plaited vintage steel tape measure and telephone wire - both 'redundant' materials.
The theme, A MEASURE OF CHAOS, came partly from my love of weaving with vintage steel tape measures, many of them made in my home town of Sheffield, South Yorkshire - once world famous for its steel industry and precision calibration tools. Generations of my family worked in the factories before they were closed down.  Others had worked in the nearby pits - supplying coal to fire the furnaces. Both my great grandfather and my great-great grandfather were colliery blacksmiths. In the 1980s whole communities fell victim to political forces that measured everything solely in terms of  profit.
The theme also refers to the fact that many traditional baskets were in themselves official measures.  A bushel, a half bushel, a peck, a cran and a sieve, for example, were precise measures of different produce.  Their production, by highly skilled basket makers who would have served a long apprenticeship, was controlled by Customs and Excise officers checking that the baskets measured up to the standard.  In several instances I've inverted this tradition by using 'measures' to make contemporary basketry.
In addition, many of my weaving techniques explore the intricacies of three dimensional geometry -   the term geometry itself  meaning earth measure.
But in the modern world, in the words of Leonard Cohen, 'There ain't nothing we can't measure any more'. Even chaos! 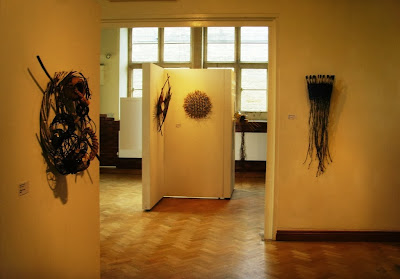 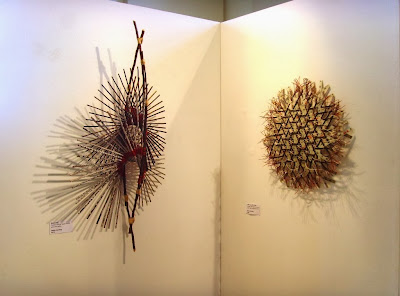 Stella Harding BLOOMING (left) and A MEASURE OF THE STARS (right) 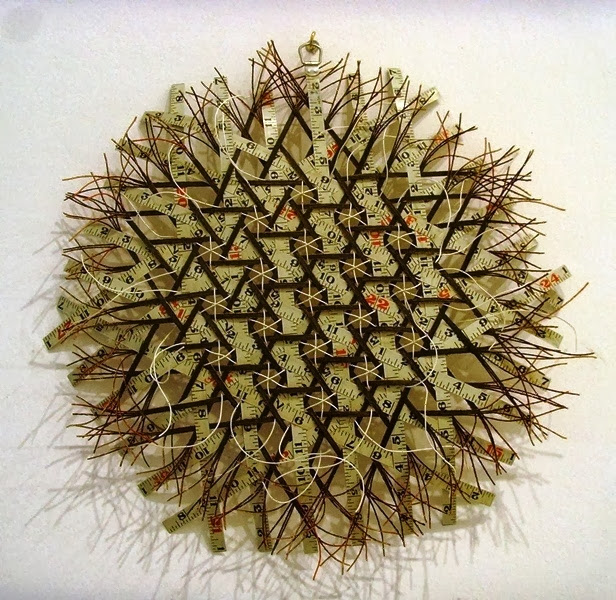 Stella Harding A MEASURE OF THE STARS 2013 - plaited vintage steel tape measure, spun paper tape and telephone wire.
In addition to a vintage steel tape measure made in Sheffield by Rabone-Chesterman circa 1950 this piece uses painted spun paper tape, another redundant product, that was made in West Yorkshire on the same machines that were used to spin wool before the decline of the woollen industry.  The tape was originally used as strapping on the machines and later to bind packages before it too was replaced by polypropylene strapping tape.  I'm now eking out the last few metres of my dwindling supply. 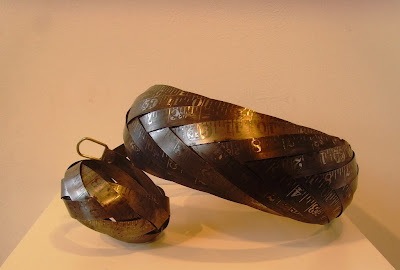 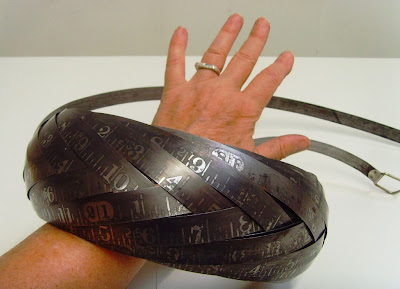 Stella Harding BIG BANGLE - work in progress - using approximately 25 feet of  etched mild steel exquisitely patinated with age and wear.
A local gallery owner who came to the show asked if  I would consider lowering the price of these tape measure pieces.  I politely declined. I may look like a soft touch but my heart is pure steel when it comes to respect for my 'redundant' materials and the craft processes that underpin my practice.  (Wannabe gallerists take note: a small measure of respect wouldn't go amiss sometimes.) 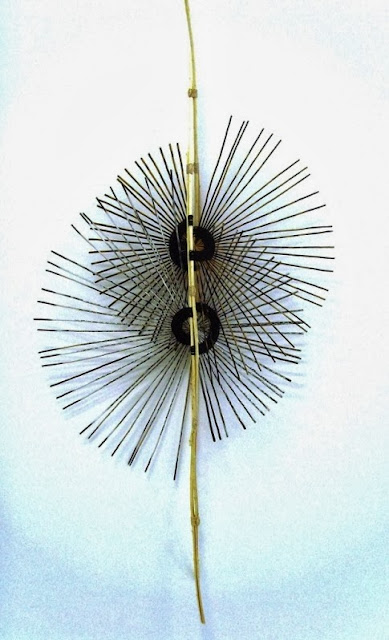 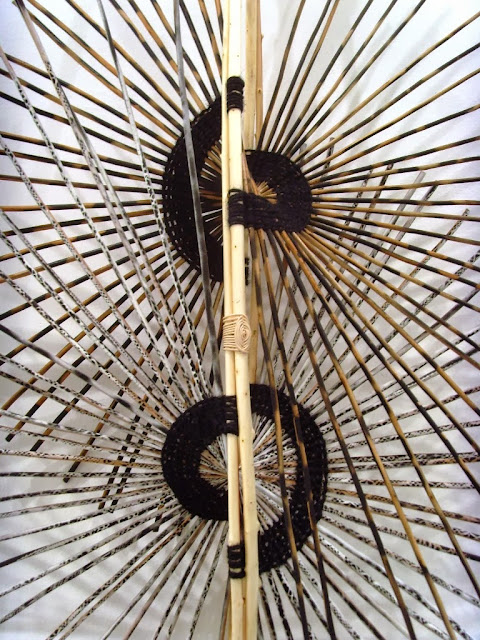 Stella Harding NEW BLOOM 2013 (detail)
Not all the work in the exhibition uses measures though. This 2 metre high wall piece is part of my on going exploration of a hyperbolic-paraboloid form I came across by chance manipulation of a twining technique.  For me it resonates with the control and release of energy (as in exploding super-novae for example) and the chaotic, contrasting, kinetic effect of intersecting hard lines and soft shadows.
Some people see Native American feathered head dresses, Zulu spears, Zoroastrian sun rays or broken bird wings.  There's a measure of chaos in all creativity, I think, and in the range of meanings it evokes - long may Chaos reign. 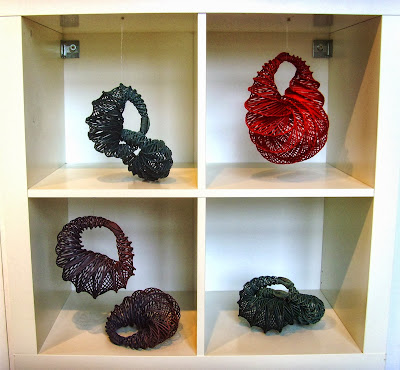 Stella Harding  ARCHEFOSSILS, JEWELS and HAGSTONES
I liked the way the Pound  displayed these spiral plait pieces in deep boxed cubes.  Each cube  becomes a little installation of these ambiguous forms - part engineered/part organic - as they take centre stage - singly or in pairs - in a frozen moment of time and space. 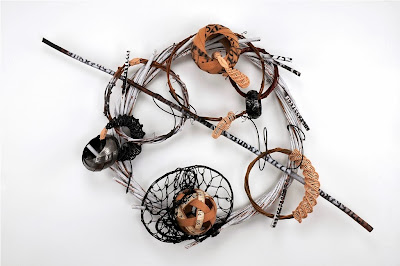 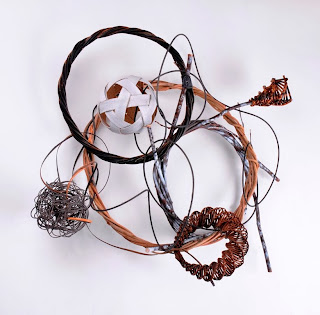 Stella Harding SHOW YOUR WORKING OUT - photo Trevor Springett
Kepler's Jewel and Show Your Working Out both reference the three-dimensional geometry underlying many basketry techniques and forms and my own attempts to negotiate the fine line between order and chaos to find a balance between mathematical precision and gestural spontaneity.  The grey 'ball' of fine rattan on the bottom left formed itself  when I plunged several very orderly and tight sprung coils into a pan of hot dye.  They ravelled themselves together in a trice - hours of pans-taking work undone before my eyes; a happy accident so perfectly imperfect that it's probably unrepeatable. 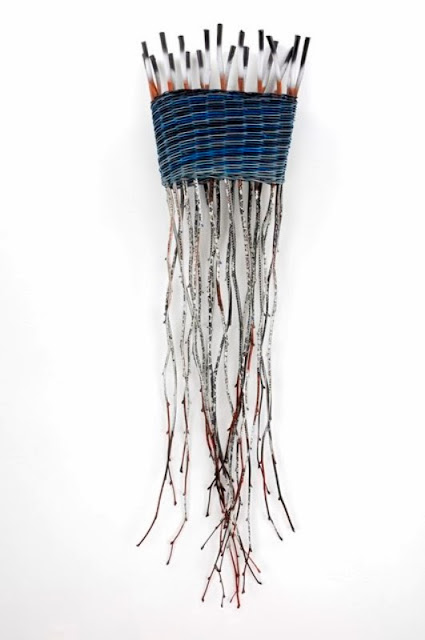 Stella Harding CHINA BLUES - painted lime wood and rattan. Photo Trevor Springett
I also allow the long fine painted stems to arrange themselves as I weave around them.  It seems I need an element of unpredictability or surprise in my working process.  The more I make though the harder this is to achieve - one's hands and eyes become too knowing as the level of tactic knowledge increases with repetition.  When there is no further measure of chaos to take me by surprise I know it's time to move on;  the wonder is gone and only tried and tested formulae remain.
Posted by stella harding at 10:15 No comments: