END OF THE LINE: Maggs Beneath the Covers #6 the weave 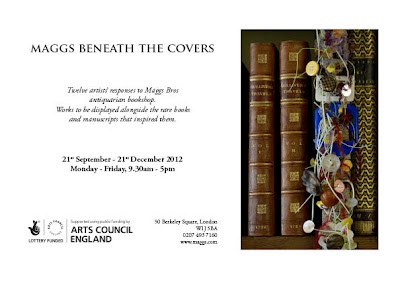 It's only a few days before the exhibition 'Maggs Beneath the Covers' opens - 12 artists responding in extreme and conceptual ways to Maggs collections of rare books and manuscripts.  I haven't seen my finished piece since it was delivered to Maggs over two months ago and now feel as if I'm writing backwards - reflecting on and un-weaving the making process.

When I delivered my piece I got chatting to another maker who was testing the installation of her work.  I asked how she'd come across the book that inspired her.  I was fascinated to hear she'd gone exploring Maggs on-line catalogue for an appropriate volume!  She'd conceived of what she wanted to make, determined by the nature of her practise and her current interests, and had then gone looking for a book that would fit the concept.  Retro engineering! Well, why not?  Why trust to happenstance and chocolate rabbits as I had done?  My more process-led approach was to work with whatever called out to me and to follow its desire line - wherever that might lead.  This might have some relation to the way basket makers often make use of whatever seasonal materials they happen to come across in their locale.

Exactly why a book owned by an imprisoned writer (my raw material) should have struck a chord with me at this juncture is something I'll reflect on later.  Perhaps it had something to do with having recently had a book published myself for which I'd written the, albeit uncontroversial, text.  Suddenly I was not simply a co-author who'd worked on the overall construction of a book but the writer who'd selected, manipulated and crafted the words, sentences and paragraphs.  This subtle distinction was an important one for me, my creative labour not to be appropriated through elision. 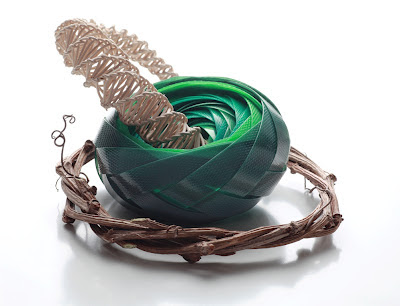 Stella Harding GREEN JEWEL 2010 Photo: Sylvain Deleu
A item of basketry, as with any crafted object, is a fusion of four variables: material, technique, form and function, each of which interacts with a more nebulous fifth - location or context.  I more typically make abstract, sculptural forms, exploring combinations of materials, techniques and forms to create re-natured assemblages that function as objects for the contemplation of the ontological uncertainty of human/nature. 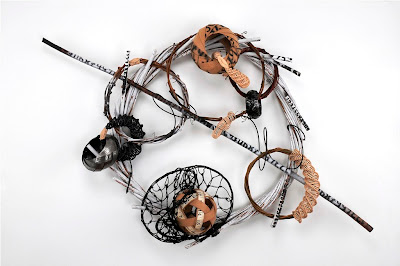 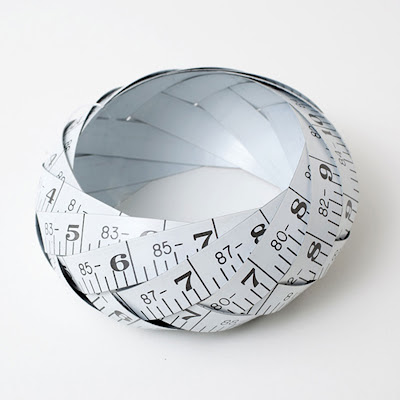 Plaited vintage printed steel tape measure bangle
At other times they might be worn as a measure of certainty, but they rarely look like conventional baskets.

For the Maggs piece  I'd allowed my researches into the unfolding storyline to dictate which material I'd use - lead, the imprinted lead then to dictate an appropriate technique - an open weave that would distribute the leaden weight economically, and the combination of material/technique to dictate the form - which I was beginning to realise was going to have to be ... a fairly conventional looking basket!

I recalled the first site visit when Robert Harding (no relation), one of Magg's directors, had spoken of the book as the 'perfect object'.  In other words, from the time the first bound volume was made the book hasn't changed its form or the way we interact with it.  Even an e-book mimics the way we open and hold a book and turn its pages.  Baskets come in many forms depending on their function but archaeological finds tell us that the basic forms for specific  functions haven't changed in millenia.  So, just as the unremarkable appearance of Ghesi's small book belied its extraordinary story, I would reflect this by making a fairly unremarkable basketry form - to function as a kind of 'stealth craft' - an innocent looking decorative container which would belie its content.  Not as a container for an imprisoned writer - as I'd originally proposed, but as an expression of the transformative power of books to free the imagination. 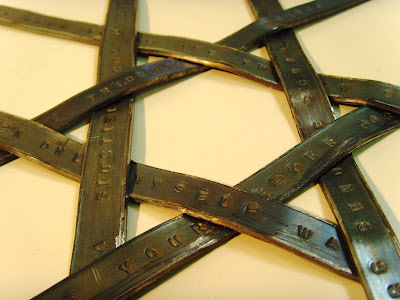 And so at last the weave began, with a six-pointed star - or a hexagon surrounded by six triangles, depending on how you look at it.  These are the  first set of connections in open hexagonal plaiting - a multi-directional (3-way) weave more commonly used for making lightweight, ephemeral containers for transporting small livestock to market. With a bit of practice it's a quick, economical weave that's used a lot in the Far East with indigenous plant material such as bamboo or rattan which can easily be split or cut into flat strips. 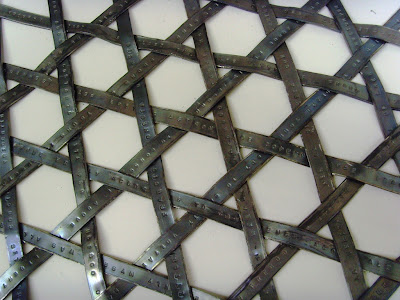 It's also one of my favourite weaves and gave me a personal connection to the story.  I've used it a lot with strips of paper or plastic tape, chair cane and cardboard.  Lead though is not a typically 'appropriate' material to use with this technique.  It has too much 'memory' and little energy or will of its own.  It's extreme malleability verges on passive resistance! But I enjoyed these qualities - it forced me to think about every move I made with this delicate and yielding material whose subtle beauty belies its reputation as a base, toxic metal.  And the  starry weave is fitting for a different reason; for lead, like all the heavy metals, was  forged in the white heat of an exploding super nova billions of years ago. What came from the stars was woven into stars. 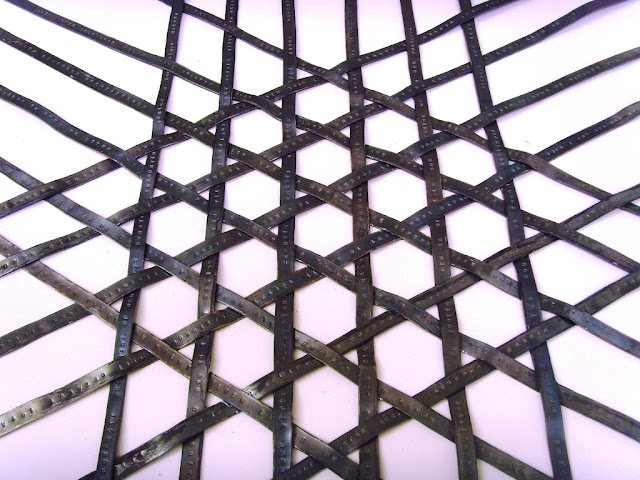 Even before I'd begun weaving the base I knew I'd be unable to add extra horizontal elements to form the sides.  I didn't want any lumpen overlapping joins so I used a bias weave even though it disrupted the pattern of stars and hexagons. 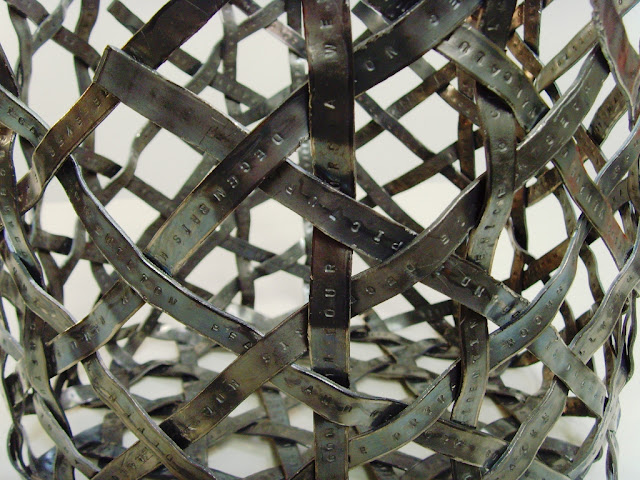 In fact the sides were a combination of a bias lattice plait with hexagonal 'intervals'.  The weave was  uneven at first despite my best efforts, but a few hours spent with a lump hammer coaxing it into shape over a mould sorted that out.
Throughout the making I'd been pondering how to represent the book itself.  One idea had been to make a porcelain slab the same dimensions as the book and to decorate it with gold lustre thus recreating my 'lost object' in tangible form. In the end there were frustrating technical issues to do with lustre-firing that couldn't be resolved in the time remaining.  My compromise solution was to gold leaf a section of the weave  the size of the book. 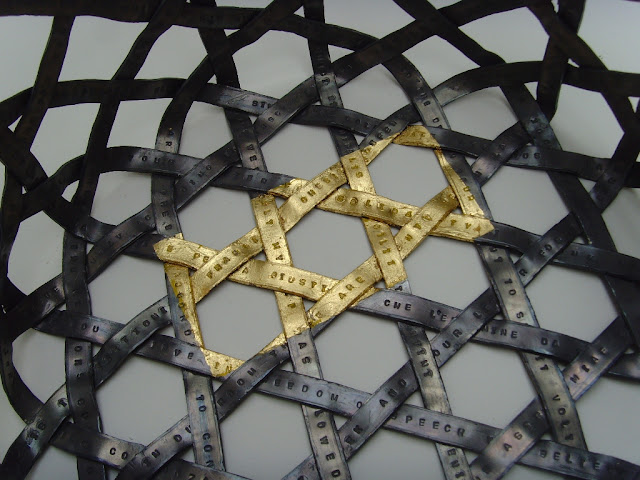 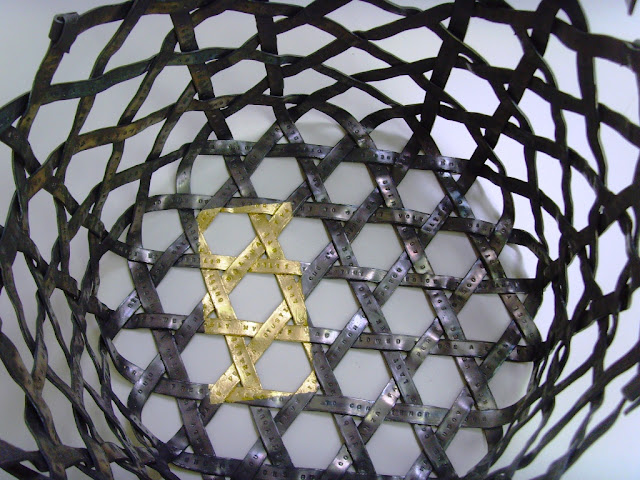 What seemed like an expedient compromise turned out for the best. Now, this alchemical symbol of Francesco Ghesi's book has become one with the weave - highlighting the parallels  with Busra Ersanli as his word 'justice' intersects with her word 'solidarity'.  That gold foil covered chocolate bunny has a lot to answer for! 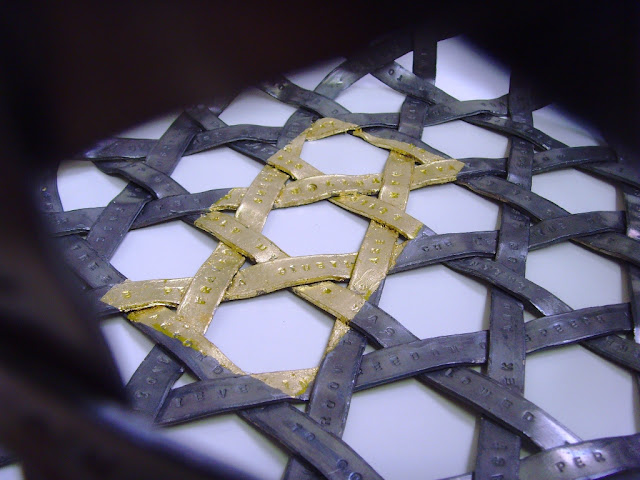 Viewed from certain angles the golden rectangle sheds precious light in a dark place and illuminates the text as in a medieval manuscript. 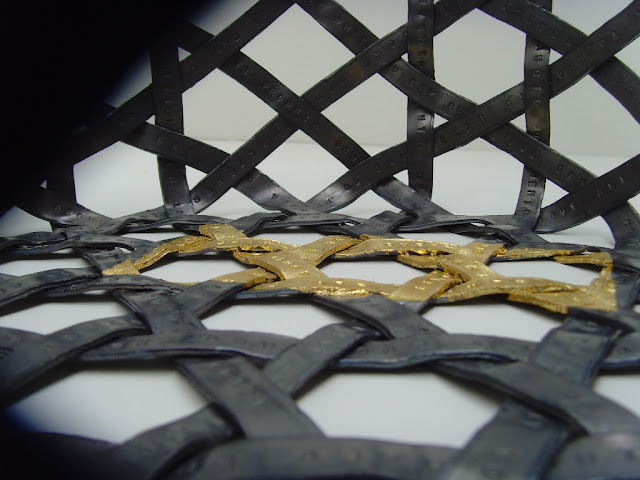 Whilst from another perspective the ecclesiastical overtones of the interior spaces are undeniable.
My final decisions were about how to finish off the basket -  how to end the story. I'd dispensed with issues of joining by choosing a bias plaiting technique that didn't require extra elements. 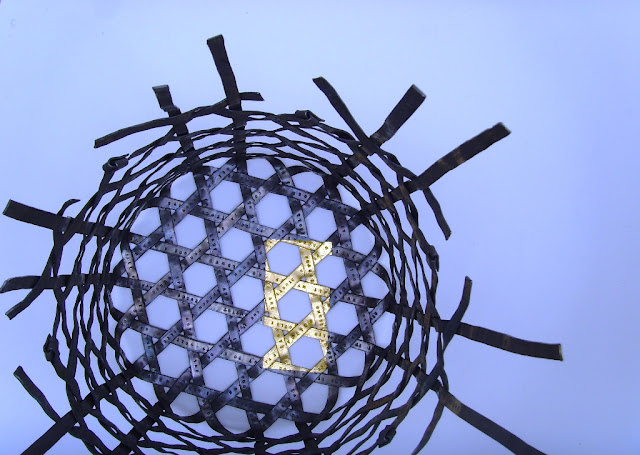 There was something compelling about not resorting to a neat resolution.  Looking askance from a different perspective showed there was no tidy closure to this story.  Though she was freed from prison after the first hearing Professor Ersanli and her co-defendants face another trial on the first of October.  Just the other day I received a reply to the letter I'd sent whilst she was in prison.  I was touched that she'd taken the time to write back to me and moved to tears by her bravery, dignity and selfless concern for her cell-mate, the translator and women's rights activist, Ayse Berktay.   Many loose ends, many more human connections, one strand at a time. 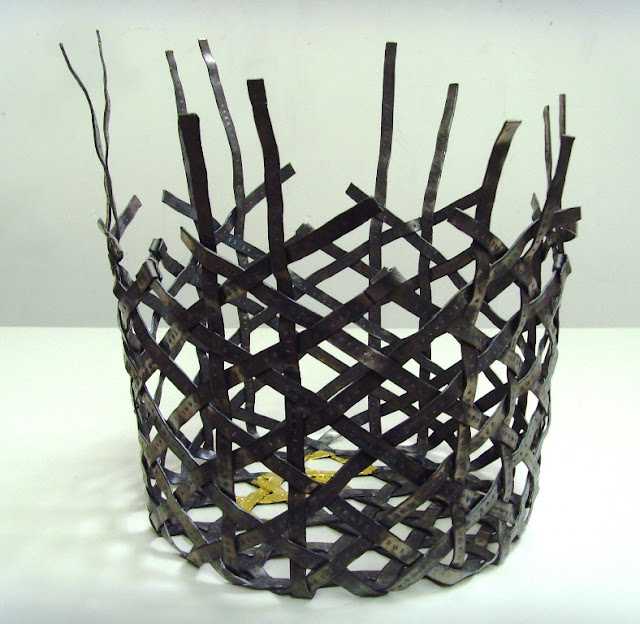